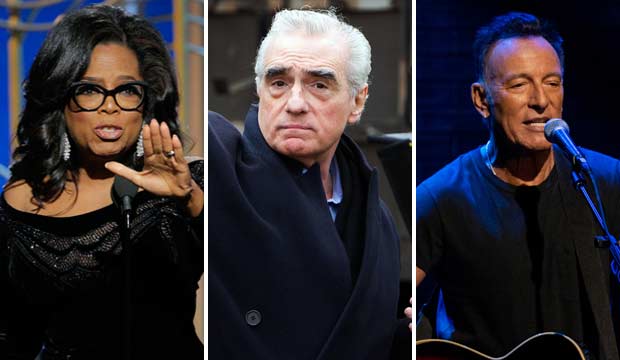 Netflix is holding its third annual FYSEE campaign in its exclusive exhibition space at Raleigh Studios to celebrate the start of Emmy season — and let’s not forget the streaming service’s continued Oscar ambitions too. Opening on May 5 and closing on June 9, the online distributor’s FYSEE events (full list here) will showcase its slate of programming with special guests including Martin Scorsese, Oprah Winfrey, Bruce Springsteen and Ava DuVernay.

The opening night on Sunday, May 5, will feature Scorsese and Springsteen together. Springsteen is an Emmy contender this year for the Netflix special “Springsteen on Broadway,” which launched on the platform last December right after it finished its run on the Great White Way. Springsteen was given an honorary Tony Award for the production, which he added to a mantel that also includes an Oscar and many Grammys. He hasn’t yet won at the Emmys, but even if he does this year it wouldn’t quite equal an EGOT since honorary Tonys don’t count towards the official showbiz grand slam.

Scorsese is also pinning his awards hopes on Netflix. His latest film, “The Irishman,” is debuting on the streaming service this fall in the hopes of grabbing the Best Picture Oscar that “Roma” narrowly missed this past year. The famed filmmaker is also known for his music documentaries: he won a pair of Emmys in 2012 for “George Harrison: Living in the Material World.”

The closing night event on June 9 will be a conversation hosted by Winfrey with the cast and crew of the limited series “When They See Us,” including writer-director DuVernay, with whom Winfrey previously worked on “Selma” and “A Wrinkle in Time.” The series, which debuts on May 31, tells the true story of the Central Park Five who were falsely convicted of rape and later exonerated. The conversation will also include the real-life men the series is based on.

But that’s not all. The month of FYSEE will also include events with Ellen DeGeneres, Quincy Jones and David Letterman, plus other showcases for their awards-contending comedies, dramas, animated shows, documentaries and more. There will also be “For Your Consideration” screenings in a 400-seat theater, plus curated panels and a reception space. It’s one of the industry’s most ambitious campaign programs, and last year it paid off with Netflix receiving more Emmy nominations than any other outlet. Will it pay off again?