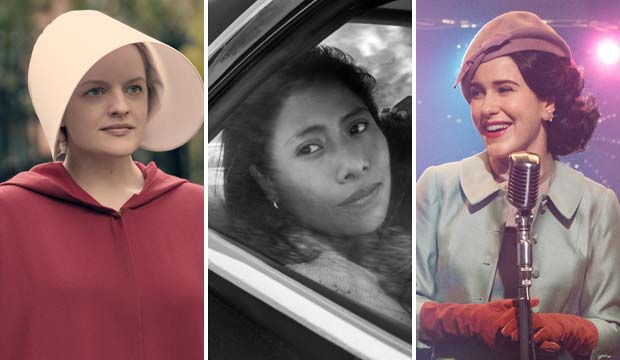 Netflix has certainly had success at the Emmys, busting down the doors with top series nominations for “House of Cards” and “Orange is the New Black,” and following those up with myriad nominations for comedies, dramas, limited series, documentaries and reality shows. In 2018 they even beat HBO as the most nominated network of the year.

But despite multiple Netflix Best Drama Series bids for “House of Cards,” “OITNB,” “The Crown” and “Stranger Things,” Hulu beat them to the punch by winning Best Drama on its very first try in that category for the dystopian “Handmaid’s.” And none of Netflix’s comedies could cross the finish line either despite bids for “OITNB” (it competed as a comedy before revised Emmy rules pushed it into drama races), “Unbreakable Kimmy Schmidt,” “Master of None” and “GLOW.”

However, the streaming service has also been inching its way towards cinema’s top awards, with increasing success. Netflix’s first big cinematic Oscars push was “Beasts of No Nation” (2015), which came close to a Best Supporting Actor nomination for Idris Elba, but was ultimately shut out. Just a couple of years later, though, they were welcomed by the motion picture academy with four nominations for “Mudbound” and a surprise Best Documentary Feature victory for “Icarus.”

SEEOscar nominations 2019 slugfest: What has us celebrating and what had us scratching our heads? [WATCH]

Then in 2018 Netflix enlisted Oscar strategist Lisa Taback in advance of its fall and winter awards campaigns for a variety of streaming projects including “Roma.” Now the Spanish-language drama is tied with “The Favourite” as the most nominated film with 10 Oscar bids including Netflix’s first nom for Best Picture. And they even scored a trio of surprise nominations for another project, the Coen Brothers’ “The Ballad of Buster Scruggs.”

But Netflix isn’t alone in this space either. Amazon has been producing films too; they earned a Best Picture nomination for “Manchester by the Sea” (2016), and they’re up for Best Director this year for Pawel Pawlikowski‘s work on the Polish drama “Cold War.” But Amazon follows a more standard distribution model: they release their films in theaters like any other studio before making their films available to stream months later. Netflix, on the other hand, has rankled some industry traditionalists by releasing their films online concurrent with their Oscar-qualifying theatrical runs.

Netflix split the difference with “Roma,” though, opening it in theaters on November 21 and giving it a few weeks to breathe on the big screen before it started streaming on December 14. But it would nevertheless be the first Best Picture winner you could view on home screens almost immediately after it was available on the silver screen. So will their first Best Picture Oscar nomination pay off after several thwarted attempts to win the top Emmys, or will the motion picture academy make them wait just like the television academy has?