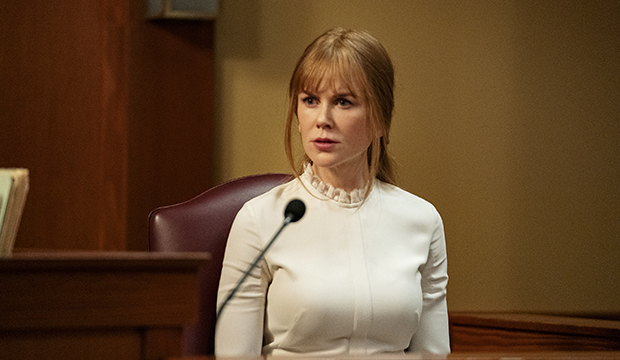 There’s nothing little about Nicole Kidman’s performance in the second season of HBO’s “Big Little Lies,” which concluded its seven-episode run in July. For her turn as Celeste Wright in the first season, she swept the awards circuit, kick-started by her Best Limited Series/TV Movie Actress Emmy Award win in 2017. But things are a bit different this time around, with Kidman having to compete in Best Drama Actress as the show is no longer a limited series, and the Emmys would be the conclusion to a second potential sweep next year.

With her uniformly excellent performance in the first season, Kidman shone a light on the contradictory feelings that are triggered by domestic abuse, which Celeste suffered at the hands of her husband Perry (Alexander Skarsgard). That was especially apparent in therapy session scenes, in which Celeste, a woman who’s closed herself off from reality to the point of normalizing her situation, is asked to reflect on her relationship with her husband.

In the second season, Kidman continued to give a believable, naturalistic performance, as Celeste clings on to the memory of Perry in the wake of his death. As outsiders looking in, her way of processing his absence — by turning to medication and other men to push him out — may be difficult to grasp, but Kidman gives it much needed dimension. Following the reveal of her son Max (Nicholas Crovetti) being Amabella’s (Ivy George) abuser in school, Celeste’s dynamic with her two boys is altered, like in the dinner scene in episode 5 (“Kill Me”). By seamlessly transitioning from lashing out to tearing up, after one of her sons calls her a bitch, Kidman brings Celeste’s parenting conflict to life: She has to teach her two boys not to turn into their father, but in a gentle way, as they’ve already experienced enough trauma.

Kidman’s juiciest material came opposite Meryl Streep, who played her mother-in-law, Mary Louise Wright. What started as a closer look into her son’s death quickly turned into a custody battle for her two grandchildren, after Mary Louise deems her daughter-in-law to be an unfit mother. Amid brutal questioning about the potential mutuality of the abuse, her ways of processing Perry’s death and the possibility of her delivering the fatal push, Celeste has to defend herself on the stand in episode 6 (“The Bad Mother”). With her subtle work, Kidman captures the anxiety, shame and rage that come with being forced to admit to and reflect on most of her life choices; Kidman’s voice quivers when Celeste realizes what is at stake, and it cracks when she’s asked to delineate the abuse.

In episode 7 (“I Want to Know”), Kidman and Streep engage in a tense back-and-forth, as it’s now Celeste’s turn to question Mary Louise’s capability of raising two children. In contrast to much of her previous material, and in typical courtroom drama fashion, Kidman gets to spout out one line after the other, allowing Celeste to fully unleash her rage, after mostly internalizing it in the first season. Ultimately, she’s granted continued full custody of her two boys, and finds closure from the past.

OK, OK, we’re barely into the 2020 Emmy eligibility window, but Kidman already has a lot going for her: Although Claire Danes (“Homeland”) is the last drama actress to have won Emmys for the first two seasons of her show, Emmy voters love repeat winners. And by the time the 2020 Emmys come around, it will have been three years since Kidman nabbed her statuette for the first season in a completely different category. Plus, performance-wise, she had vastly different waters to navigate this season, which could sway voters to check her off a second time.

SEE Will ‘Big Little Lies’ star Zoe Kravitz be the last of the Monterey Five to get Emmy love in 2020?

Of course, it’s always risky to premiere early on in the cycle, but Kidman will grace the screen several times in the upcoming year: She’ll be appearing in John Crowley’s adaptation of “The Goldfinch” and in Jay Roach’s “Bombshell,” about Roger Ailes. She’s also working alongside Hugh Grant in David E. Kelley’s new HBO limited series “The Undoing,” which will premiere sometime next year. So not only could we see her shortlisted for her film work, but “Lies” will probably make a big splash at precursors like the Golden Globe, Critics’ Choice and Screen Actors Guild Awards, giving it the boost it might need leading up to the Emmys.

Besides, other potential nominees, like her co-star Reese Witherspoon or “The Handmaid’s Tale’s” Elisabeth Moss, have also already appeared in their 2020-eligible seasons. But all eyes will be on Olivia Colman, who will play Queen Elizabeth II in the upcoming third and fourth seasons of Netflix’s “The Crown,” taking over for reigning Best Drama Actress champ Claire Foy. While Season 3 doesn’t premiere until Nov. 17, it wouldn’t be shocking to see Colman rake in all the awards, as she’s coming off a surprising Best Actress Academy Award win for “The Favourite,” in which she played Queen Anne, another British monarch.