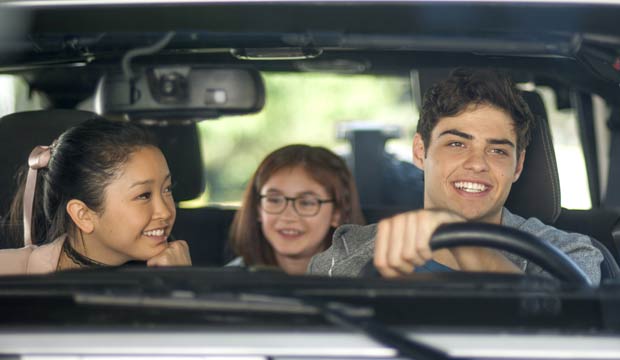 The MTV Movie and TV Awards are voted on by fans online, which is usually good news for teen idols with passionate fan bases. This year that could benefit Noah Centineo, the 23-year-old heartthrob who appeared on “The Fosters” for three years but broke through in 2018 and 2019 thanks to the Netflix rom-coms “To All the Boys I’ve Loved Before,” “Sierra Burgess is a Loser” and “The Perfect Date.” He’s nominated for Best Breakthrough Performance for “All the Boys.” Is he bound to win?

Lots of young heartthrobs have won this award in the past, including James Van Der Beek (“Varsity Blues”), Orlando Bloom (“The Lord of the Rings: The Fellowship of the Ring”), Zac Efron (“Hairspray”) and Robert Pattinson (“Twilight”). And the fact that Centineo has had such success on a platform like Netflix might also help him since that streaming service has such a wide reach and thus is accessible to lots of fans. So as of this writing Centineo leads our predictions with odds of 17/5. Those odds are based on the combined predictions of hundreds of Gold Derby users. You can make or update your own predictions right here as often as you like before the winners are revealed.

But this category is not necessarily as simple as finding the hunkiest guy in the room. Heartthrobs don’t always win. In 2010 Chris Pine (“Star Trek”) lost to Anna Kendrick (“Up in the Air”). In 2012 Liam Hemsworth (“The Hunger Games”) was defeated by Shailene Woodley (“The Descendants”). And just last year Timothee Chalamet (“Call Me by Your Name“) was bested by Tiffany Haddish (“Girls Trip”). So it turns out breakout women are often just as competitive as their studly rivals. In this contest that could benefit Awkwafina (“Crazy Rich Asians”), who ranks a very close second in our predictions with odds of 18/5.

Rounding out this year’s category are MJ Rodriguez (“Pose”), Haley Lu Richardson (“Five Feet Apart”) and Ncuti Gatwa (“Sex Education”). Might we be underestimating one of them as well? 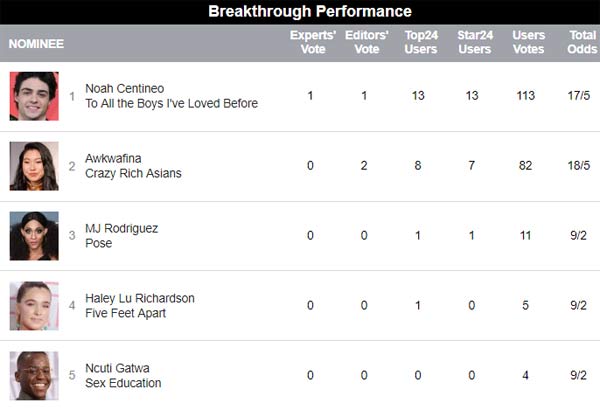