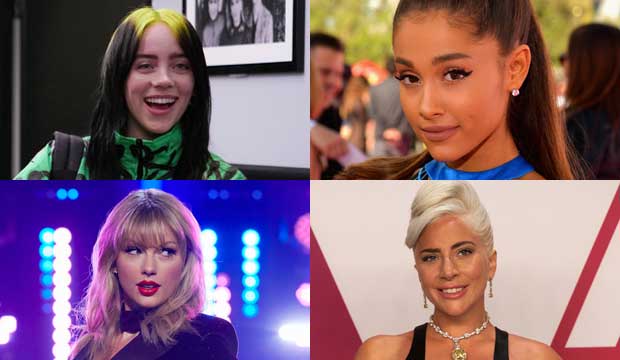 The 2020 Grammy nominations will be announced on Wednesday morning, November 20, at 8:20am Eastern (5:20am for those of you on the west coast). So who will make the cut when the recording academy announces their picks? Scroll down for our official predictions in the top four general field categories, listed in order of their odds with our projected winners highlighted in gold. These odds are based on the combined predictions of more than 2,500 users who have made their forecasts here in our predictions center. You can make or update your own predictions until just before the announcement.

One of the year’s biggest success stories has been the ascent of Billie Eilish. She may not be old enough to vote yet (she turns 18 in December), but she’s the odds-on favorite to win all four general field categories, which would make her only the third artist ever to achieve that feat and the second to win them all in a single year. Christopher Cross swept those four prizes in 1981. A few decades later Adele won them categories, but in separate years: Best New Artist in 2009, then Album, Record and Song in 2012 and 2017.

But Eilish won’t be alone as we’re also predicting that Lizzo will be nominated in all four categories. If we’re right, it would be the first time in Grammy history that two artists sweep the general field.

2019’s other big breakthrough came from Lil Nas X, who made history when “Old Town Road,” his collaboration with Billy Ray Cyrus, spent an unprecedented 19 weeks at number-one on the Billboard Hot 100 singles chart, breaking the record of 16 weeks previously set by “One Sweet Day” by Mariah Carey and Boyz II Men and “Despacito” by Luis Fonsi, Daddy Yankee and Justin Bieber. Both “One Sweet Day” and “Despacito” were nominated for Record of the Year, and we’re expecting a bid in that race for “Old Town Road” too. We think Lil Nas X will also make it into Song of the Year and Best New Artist.

Other top contenders include Ariana Grande and her acclaimed, chart-topping album “Thank U, Next”; she won the first Grammy of her career earlier this year, and now she stands a good chance of cracking the general field for the first time in her career. Also, 10-time Grammy winner Taylor Swift (“Lover“) and nine-time Grammy winner Lady Gaga (“A Star is Born” soundtrack) are poised to return to the Album of the Year race.

But watch out for major surprises across the board. This will be the second year with eight nominees in the general field races, as opposed to the previous five. And the final decisions are made by nomination review committees, who pick the final nominees from the top 20 contenders voted on by the recording academy at large. Those committees are known to throw us curve balls like last year’s Album, Record and Song of the Year bids for Americana artist Brandi Carlile.

What surprises are you anticipating this year? Check out our predictions below, and be sure to make your own predictions here.

SEEGrammy predictions: These top users are betting on Ariana Grande to upset Billie Eilish for Album of the Year