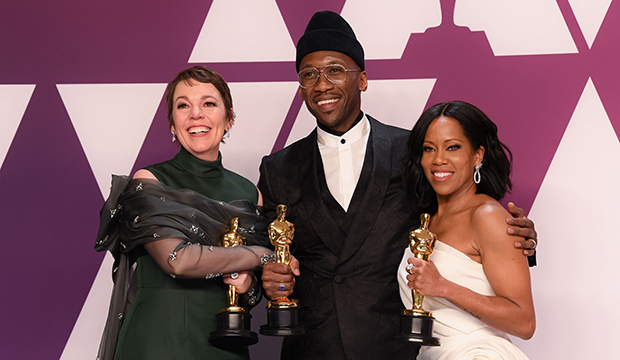 Three of this year’s four acting Oscar winners — Olivia Colman (“The Favourite”), Regina King (“If Beale Street Could Talk”) and Mahershala Ali (“Green Book”) — could get Emmy nominations on Tuesday, but 46 percent of our readers believe only two will hear their names called.

Of the three, Ali has the best odds in our predictions as he’s the top choice to win Best Limited Series/TV Movie Actor for “True Detective.” A previous nominee for his guest appearance on “House of Cards,” Ali is hoping to accomplish what Matthew McConaughey couldn’t five years ago. Fresh off an Oscar for “Dallas Buyers Club” (2013), McConaughey lost the Best Drama Actor Emmy to Bryan Cranston (“Breaking Bad”), a twist ending to the McConaissance. After that, anthology series like “True Detective” were forced to enter as limited series.

SEE 3 of this year’s acting Oscar winners are seeking Emmy nominations, but who will make the cut?

Colman has the second best odds to make the cut for her supporting turn on “Fleabag.” She’s in the precarious sixth slot in our odds, rising in the past month after the pure adoration for the show’s second season. The actress had the potential to earn up to three Emmy bids this year, but “The Crown” is skipping this cycle and she was not submitted for the PBS miniseries “Les Miserables.” So all of her eggs are in “Fleabag’s” basket.

Ironically, the Emmy-winningest one of the trio looks to be the odd Oscar champ out this year. Three-time Emmy winner King is in 15th place in our Best Comedy Guest Actress odds for “The Big Bang Theory.” She has never been nominated before for “Big Bang,” but she’s been an Emmy darling the past four years. Coupled with the Oscar, anything could happen.

Meanwhile, 33 percent only think one of them will get nominated, 13 percent think all three will, and 8 percent believe all three will be snubbed. Too bad Best Actor champ Rami Malek (“Bohemian Rhapsody”) is ineligible for “Mr. Robot” otherwise we could’ve had all for Oscar winners in the running, and Malek hasn’t made it back to the Emmys since he won in 2016.