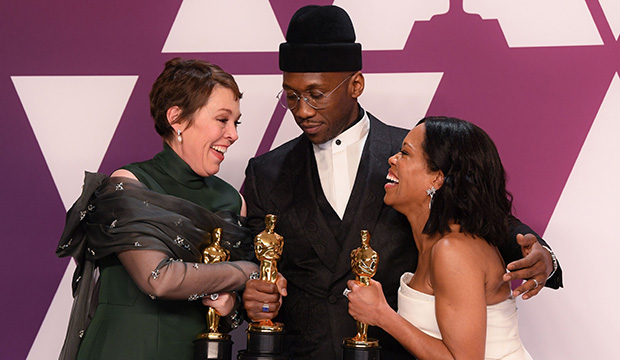 Will the Emmys be a small case of Oscar déjà vu? Three of the four acting Oscar champs — Olivia Colman (“The Favourite”), Regina King (“If Beale Street Could Talk”) and Mahershala Ali (“Green Book”) — could find themselves with Emmy nominations later this month. But how many of them will actually get one?

During a brief period in time earlier this year, Colman could’ve potentially reaped three bids, but “The Crown,” on which she plays Queen Elizabeth II for Seasons 3 and 4, is skipping this Emmy cycle, and she wasn’t submitted for the PBS miniseries adaptation of “Les Miserables.” That leaves “Fleabag,” on which Colman plays the titular character’s (Phoebe Waller-Bridge) godmother-turned-stepmother, as her only eligible show/submission. A previous Emmy nominee for “The Night Manager,” Colman is currently in sixth place in our Best Comedy Supporting Actress odds. Helping her cause is not just her Oscar win, but the fact that everyone and their mother is besotted with “Fleabag” since the second season dropped in May.

Colman lost her previous Emmy bid to none other than King, who won her second straight Best Limited Series/TV Movie Supporting Actress statuette for “American Crime” in 2016. King has become an Emmy juggernaut, claiming her third award in four years last September, this time in lead for her one-and-done Netflix series “Seven Seconds.” King, who headlines Damon Lindelof‘s upcoming “Watchmen” series on HBO, is in contention this year for her guest spot on “The Big Bang Theory.” She’s in 15th place in our odds and has never been nominated for her previous appearances on “Big Bang,” but perhaps she’ll get an Oscar boost.

Ali is the only one of the three who’s projected to win an Emmy. He’s the odds-on favorite to take home Best Limited Series/TV Movie Actor for “True Detective,” which was airing during his second Oscar run. If he does prevail, he’d do what Matthew McConaughey was unable to do five years ago and win an Oscar and an Emmy for “True Detective” in the same calendar year. Though back then, HBO flexed hard and entered the first season of “True Detective” in drama, but the McConaissance wasn’t strong enough to overcome the One Who Knocks.

Best Actor Oscar champ Rami Malek (“Bohemian Rhapsody”) is the only one of the quartet MIA this Emmy season, but he already has an Emmy for “Mr. Robot,” which he won alongside King in 2016, and will be back in the running next year for its final season, so don’t feel too bad.