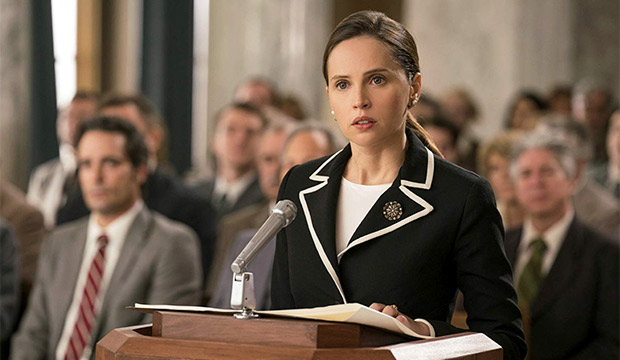 Late-December release “On the Basis of Sex” has received limited Oscar buzz, but the 1970s-set biopic starring Felicity Jones as Ruth Bader Ginsburg has the makings of the Best Picture nominee that nobody sees coming. The Supreme Court justice has already taken this awards season by storm, having been seen on the big screen earlier in 2018 in “RBG.” That box office sleeper hit is one of the top contenders in the Best Documentary Feature race, winning at the Critics’ Choice Documentary Awards and expected to receive a couple of Oscar nominations. Ginsburg is widely considered a national hero and pop culture icon, and her recent health scares have put liberals (probably including members of the motion picture academy) on edge. Such sympathy could manifest in votes for her scripted biopic too.

With groups like the American Film Institute, Critics’ Choice Awards and Producers Guild having already announced their top 10 films, the pool from which the Oscar nominees for Best Picture will be drawn feels set, but the academy often surprises us with a nominee that was snubbed by most or all of those groups. Last year’s “Phantom Thread” seemed too art-house. 2014’s “Philomena” and 2012’s “Amour” were underestimated possibly because they were foreign. 2011’s “Extremely Loud and Incredibly Close” and 2009’s “The Blind Side” were not considered Best Picture contenders because they were derided by critics.

Following an Oscar-qualifying release that began on Christmas, “On the Basis of Sex” expanded theatrically on January 11, earning an A grade from general audiences polled by CinemaScore, a considerably better response than the film received from critics, whose reviews yielded an aggregated score of 60 on Metacritic. “The Blind Side,” “Extremely Loud” and “Philomena” had widely varying MC scores of 53, 46 and 77, respectively, but like “Sex” they all did markedly better with CinemaScore where they were graded A+, A- and A.

IndieWire noted “On the Basis of Sex” as a “success” in light of its $6 million weekend in wide release, which demonstrated “considerable continued strength.” Considering its prospects, Forbes called it “a crowd-pleaser to be sure [that] may well play to general audiences as the high-quality, straight-down-the-middle programmer that it is.”

Deadline compared its sales with “Darkest Hour” (2017) which “On the Basis of Sex” has already replicated by winning the Audience Award at December’s Whistler Film Festival, which hosted the film’s western Canadian premiere. The people’s choice at Whistler has fared well at the Oscars in recent years: “Darkest Hour” won 2 Oscars from 6 nominations, “La La Land” (2016) won 6 Oscars from 14 nominations and “Carol” (2015) received 6 nominations.

SEE2019 Oscar predictions by film: ‘A Star is Born’ will have a lot to sing about with a leading 11 nominations

Crowd-pleasers like this one can be too sentimental and stylistically old-fashioned to appeal to snobbish critics, but the Oscars have more populist sensibilities because they are voted on by thousands of industry workers, not by journalists. We’ve already seen awards success this season for feel-good fare that underwhelmed critics. “Green Book” scored a respectable 70 on Metacritic, but it won a leading three Golden Globes on the heels of its People’s Choice Award at the Toronto International Film Festival and its A+ CinemaScore.

“Bohemian Rhapsody” scored 49 on Metacritic, but won two Golden Globes, propelled by an A CinemaScore and a record-breaking $200 million domestic box office run. And “Black Panther” is the rare film that topped the year’s domestic box office and was received well by audiences (A+), critics (88 on MetaCritic) and major awards groups (Golden Globes, Critics’ Choice, SAG Awards and more). Could “On the Basis of Sex” surprise us and join that fan-friendly Oscars lineup?

SEEmore about the background of “On the Basis of Sex.”

What crafts do you think will get nominations from the academy? Make your Oscar predictions today so that Hollywood insiders can see how their films and performers are faring in our odds. You can keep changing your predictions as often as you like until nominations are announced on January 22. And join in the debate taking place right now with Hollywood insiders in our film forum.