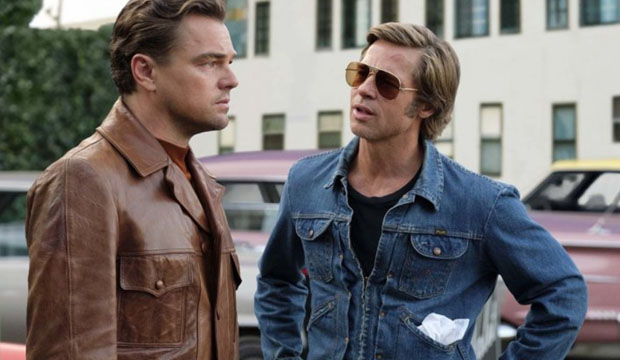 UPDATED (8/10/2019): In “Once Upon a Time in Hollywood,” Leonardo DiCaprio and Brad Pitt both have big, sprawling screen roles, so Oscarwatchers are abuzz with speculation over who’ll campaign in the lead and supporting categories. Many pundits believe they need to pick different races to avoid vote-splitting, leading some oddsmakers to recommend Pitt should go supporting. That triggered rumors that a formal category determination has been made, but a campaign insider tells Gold Derby: “No decision has been made. There’s still a lot of time to see how these races play out.”

In Gold Derby’s prediction center, we now have Pitt listed as an option in both lead and supporting. Take your pick to help settle the matter!

Once upon a time in Hollywood, male co-leads in a film were allowed to go mano-to-mano and duke it out in the same Oscar category. The first instance of this situation was when cast mates Clark Gable, Charles Laughton and Franchot Tone went up against each other in 1935’s “Mutiny on the Bounty.” In that case, there was no other choice since supporting acting categories weren’t added to the ballot until 1937. Alas, all three stars were bested by Victor McLaglen in “The Informer.”

Since then, there have been 12 instances when two male performers from the same movie engaged in lead double-dipping. The last occasion was 1984’s “Amadeus,” with F. Murray Abraham as Salieri and Tom Hulce as Mozart were pitted against one another. Unlike his villainous composer, who was bested by his more talented rival, Abraham took the prize.

But these days, when every nomination in awards season is seen as opportunity to boost box office and up the odds of winning trophies, having actors face off  and risk cancelling each other out doesn’t make sense even if it might summon accusations of category fraud.

But this situation has become a hot topic recently as Leonardo DiCaprio and Brad Pitt, both in their middle-aged prime at age 44 and 55,  are paired on the big screen for the first time with each receiving rave reviews for their performances in Quentin Tarantino‘s nostalgic look at the summer of 1969 in “Once Upon a Time in Hollywood.” After the showbiz fable that details the three days leading up to the Manson Family murders in Los Angeles premiered in Cannes, social media was rife with speculation from pundits and critics about whether they should be treated as co-leads.

It’s possible that no final decision will be made for a long time. Recall that Viola Davis, who won a supporting Oscar for  2016 “Fences,” lingered in both categories on the Gold Derby site for a considerable amount of time until her status was settled.

Critic Justin Chang of the “Los Angeles Times” is not alone when he shared his opinion on the matter as he wrote, “The second-billed Pitt may be the lower man on the industry totem pole, but this is very much his movie.” Part of the rooting passion for Pitt is the fact that while he won an Oscar for producing the Best Picture winner “12 Years a Slave” in 2013, he has never won an acting Oscar despite being nominated three times — supporting for 1995’s “12 Monkeys,” and lead for 2008’s “The Curious Case of Benjamin Button” and 2011’s “Moneyball.” DiCaprio, on the other hand, finally won an Oscar on his fifth try for his lead role in 2015’s “The Revenant.”

Few wouldn’t applaud any honor won by Pitt. But his role in “Once Upon a Time in Hollywood” as Cliff Booth, stunt double extraordinaire, faithful companion and go-fer for DiCaprio’s TV Western star Rick Dalton as he struggles to switch to films as his preferred small-screen genre goes out of favor, is very much in the mode of a loyal sidekick. It’s doubtful that anyone who has sat through the two-hour and 45-minute film and actually timed the amount of screen time for each actor (all bets will be off, however, once screeners are out).  But I suspect that Pitt might actually have more with his extended choreographed fight sequences. But his very role is that of a supporting player –and there is much honor in that as Cliff clearly proves.