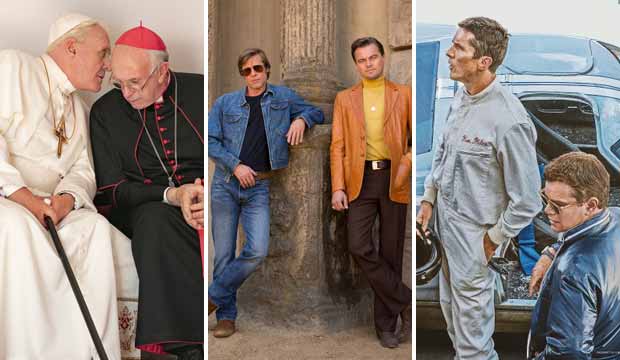 When Quentin Tarantino‘s nostalgic hippie-era fable “Once Upon a Time in Hollywood” opened in late July, there was much speculation about whether its male stars Leonardo DiCaprio as a fading TV Western star and Brad Pitt as his loyal body double would compete as co-leads when it came to awards categories or whether Pitt would be slotted in the supporting actor category. After all, his character Cliff Booth is basically defines the loyal sidekick archetype — not that there’s anything wrong with that.

For now on Gold Derby, Pitt’s name can be found in both lists in the predictions center.  Currently, he is ranked No. 16 among lead actors for “Hollywood.” Complicating matters, however, is that he is also ensconced at No. 25 for his space thriller “Ad Astra.” The best news for Pitt, however, is that he’s sitting pretty atop the supporting actor list. While he has an Oscar as a producer for 2013’s Best Picture champ “12 Years a Slave,” the three-times-nominated star might just have his best chance yet to finally win for his acting in a secondary spot.

But Tarantino’s ode to Tinseltown past isn’t the only Oscar hopeful that is facing such a category conundrum. Also up in the air is how Matt Damon as car designer Carroll Shelby and Christian Bale as hot shot race car driver Ken Miles will be defined on the ballot in “Ford v Ferrari.” At this moment, Bale is in eighth place among lead actors while Damon is at No. 13.  As for their placement among supporting males, Bale is at No. 15 while Damon is at 24.

Right now, Tom Hanks, who brings to life the beloved children’s show TV host Fred Rogers in “A Beautiful Day in the Neighborhood,” is considered supporting while Matthew Rhys, who embodies an “Esquire” reporter whose cynical outlook is changed after he does a profile on the beloved icon, is among the lead hopefuls.

It might be just as well for Hanks to play the second fiddle for once. While Rhys is in the 27th spot for now among lead males, his co-star is at No. 2 among supporting players. It might seem like Hanks has a wall full of trophies for his cinematic output, he actually has won just two Best Actor Oscars — back to back — for 1993’s “Philadelphia” and 1994’s “Forrest Gump.” Since then, he has been up for a lead trophy three more times — 1988’s “Big,” 1998’s “Saving Private Ryan” and 2000’s “Cast Away.” That’s it. Nearly two decades without Academy Award recognition. So it seems cagier strategy to go the supporting route for his channeling of Mr. Rogers.

The idea that a movie can declare male co-stars as both leads seems to have faded away. The last time that happened, it was  25 years ago when F. Murray Abraham and Tom Hulce faced off in 1984’s “Amadeus” — and Abraham won. There is now a sense, however, that such a scenario cancels out a possible win for either. Plus, it also means one less possible Oscar to be counted in a film’s overall tally.

In her state of the race piece after attending Telluride, Gold Derby Expert and Awards Daily doyenne Sasha Stone rightly observed that a Best Actor nod and a Best Picture nomination often go together. As she wrote, “Usually three to five contenders in Best Actor are featured in Best Picture nominees , far more than Best Actress contenders have a chance to be. Best Actor glory often leads a movie to Best Picture victory, and in a year like this one, where a few notable films seem to have two men with leading roles and not just one, it’s going to be tricky figuring out who will go where.”

Last year, however, there was similar female scenario in play over who was on first with the three acclaimed actresses in “The Favourite.” Emma Stone and Rachel Weisz‘s ladies in waiting ended up pitted against one another in supporting and while Olivia Colman‘s Queen Anne took a spot among in the lead race. While some would argue (including me) that Stone should have rightly qualify as lead, both she and Weisz have previously won Oscar trophies  —  a lead for Stone in 2016’s “La La Land” and  a supporting for Weisz in 2005’s “The Constant Gardener” — while Colman had no previous Academy Award attention. Obviously, that set-up helped the popular English actress to claim the lead Oscar crown.

This Oscar season might have a similar multi-actress scenario with “Bombshell” as the exact categories for Charlize Theron, Margot Robbie and Nicole Kidman are yet to be determined.

Is it category fraud to avoid pitting acting equals against one another in the same movie or is it smart of the backers of such films to stretch their awards reach as far as possible? Perhaps, but it does make the contest a bit more interesting. Use the comments section below to discuss the topic further.