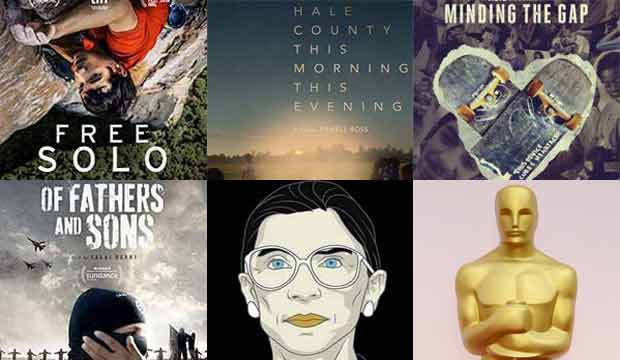 Up until this week, I was predicting that “RBG,” the Oscar-nominated documentary tribute to the wonder woman who is Supreme Court Justice Ruth Bader Ginsberg would win, mostly because of its medicinal effect on our uncertain times. It gets many things right, like highlighting her nearly half-century love story with her devoted husband, Martin, her odd couple friendship with fellow Justice Antonin Scalia and her career-long dedication to fighting on behalf of women to be treated as equals in the eyes of the law.

But “RBG’ has one major flaw that is simply the fault of Ginsberg’s profession. We can’t eavesdrop on her arguments in the Supreme Court or witness her as she delivers those scathingly brilliant dissents in real time. Basically, we rummage through her closet and see her jazzy array of jabots that she wears with her robes. And we can hear her arguments for her landmark cases over the years. But we can’t really watch her on the job.

Look, I fell hard for Agnes Varda in “Faces Places” last year and it got me nowhere. Cute little old ladies who are forces of nature are great, but sentiment doesn’t go as far these days when it comes to docs. You know what does? Sports, especially when the doc in question centers on controversy or troubled men. This decade, “Undefeated,” about a struggling Memphis high-school football team, won the 2011 Oscar. “O.J.: Made in America” won the 2016 trophy. And, last year, “Icarus” — about the doping scandal in sports — crossed the finish line and grabbed the statuette.

“Free Solo,” however, is a step beyond most sport docs. This is one that offers a grand cinematic experience as we watch our obsessed thrill junkie subject, Alex Honnold, attempt to do a feat at high altitude that no one has ever done: Free climb the forbidding expanse 3,000-foot expanse of El Capitan, Yosemite’s nearly 3,ooo-foot granite wall without any equipment. Unlike “RBG,” this viewing experience gives us that “you are there” feeling. On the human side,we also see Honnold attempt his first real relationship with a woman, a struggle that is sometime the equal of his sky-high challenges.  It also just won Best Documentary at BAFTA, which counts for something.

Then there are three brave souls predicting “Minding the Gap,” about three young men growing up in Rockford, Illinois, who are united by their love of skateboarding and how they define what it means to be a man these days and part of a community. Susan King (Gold Derby ), Sasha Stone (Awards Daily), Tim Gray (Variety) are backing this topical contender. Considering that “Gap” earned a 100% score on Rotten Tomatoes, I wouldn’t be too shocked if they all were right.

Top TV music composers on what they wish they could've known when they first got started, including not…

You're invited to our Emmy Q&A next Tuesday: Meet music composers of 'Game of Thrones,' 'Free Solo,'…