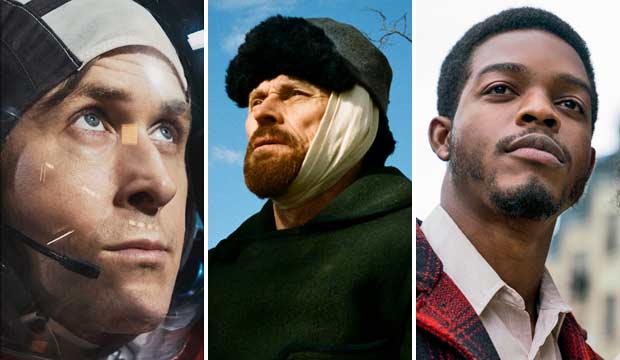 But you can always count on the Oscars to deliver at least a handful of major surprises across their 24 categories. So which underdogs should we watch out for in this race? Below are the top five contenders on the bubble with at least one Expert predicting them for nominations as of this writing.

John David Washington, “BlacKkKlansman” (11 Experts) — When you combine the predictions of all Gold Derby users, Washington actually ranks ahead of Hawke for his role as a real-life black detective who infiltrated the Ku Klux Klan, and it’s easy to see why. We’ve been underestimating him and his film all season only to be proven wrong at every turn. Washington earned nominations over Hawke at the Golden Globes and SAG Awards, and “BlacKkKlansman” is up for Best Picture at the BAFTAs even with only five nomination slots at that event. Plus, he’s royalty: his dad is two-time Oscar champ Denzel Washington.

Willem Dafoe, “At Eternity’s Gate” (3 Experts) — The Oscars love biographical roles, and here’s another. Dafoe plays doomed painter Vincent Van Gogh in this art film from Julian Schnabel (“The Diving Bell and the Butterfly”). Dafoe was nominated by the Golden Globes, Critics’ Choice Awards and the National Society of Film Critics, and Oscar voters may want to make it up to the overdue veteran after his Best Supporting Actor loss last year for “The Florida Project.”

Ryan Gosling, “First Man” (1 Expert) — Yet another biopic in the running, and this one seemed like it should have been a slam dunk earlier in the season. Gosling plays an American hero (astronaut Neil Armstrong) in a critically acclaimed film from a recent Oscar winner (“La La Land” director Damien Chazelle). But Gosling’s role is understated, and the film’s box office under-performance may have stigmatized it for awards voters. But he still earned a Critics’ Choice nom for his trouble, so don’t count him out.

Stephan James, “If Beale Street Could Talk” (1 Expert) — James is the only man on this list who plays a fictional character. He stars in this James Baldwin adaptation as a lovestruck young man jailed for a crime he didn’t commit. James himself hasn’t gotten much love from awards groups thus far for his performance, but he did earn a Golden Globe nomination for his starring role in the Amazon TV series “Homecoming,” which could give him an added boost in this contest. And the film ranks among our Experts’ top 10 contenders for Best Picture, so its leading man could potentially go along for the ride.

Robert Redford, “The Old Man and the Gun” (1 Expert) — This acting legend has had a surprisingly difficult time getting Oscar nominations for acting. The only bid he ever earned for his work on screen was for his leading role in “The Sting” (1973). Since then he won for directing “Ordinary People” (1980), and then he was awarded an honorary Oscar for his body of work (2002) — nothing since then. But Redford earned a Golden Globe nomination for this true story about an elderly bank robber, and he announced that he’s retiring from acting, so this may be Oscar voters’ last chance to honor him.