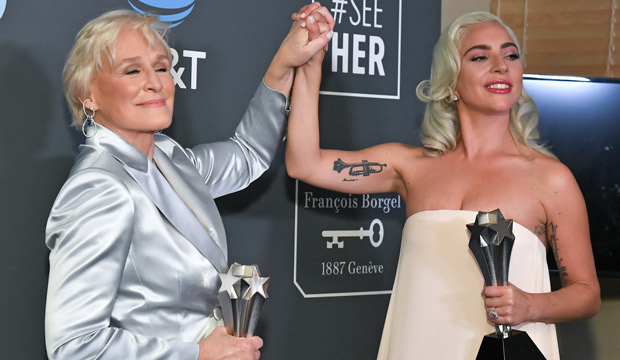 If Gold Derby’s racetrack odds are correct, get ready to see acceptance speeches on Oscar night from two of the year’s biggest awards magnets: Glenn Close and Lady Gaga. Close leads our Best Actress predictions for her portrayal of unfulfilled spouse Joan Castleman in “The Wife,” while Gaga has a commanding lead for co-writing Best Song contender “Shallow” from the musical drama “A Star Is Born.” While both leading ladies would love to win the Best Actress race, it’s looking more and more likely that the Academy Awards may give Close the acting prize and Gaga the song trophy, just like at the Golden Globes.

Earlier this week the Critics’ Choice Awards threw us all for a loop by declaring a tie between Close and Gaga in the Best Actress race. However, don’t expect the Oscars to follow suit as they’ve only awarded one prior tie in this category, in 1968 for Katharine Hepburn (“The Lion in Winter”) and Barbra Streisand (“Funny Girl”). Conversely, the Critics’ Choice Awards are so fond of ties that this is the third in this category alone following Anne Hathaway (“Rachel Getting Married”) and Meryl Streep (“Doubt”) in 2008 and Sandra Bullock (“The Blind Side”) and Streep again (“Julie & Julia”) in 2009.

After being declared a tie at the Critics’ Choice Awards, Close proudly declared at the podium, “I think I can speak for all of the women in this room. We celebrate each other. And we are proud to be in this room together.” That mimicked Close’s Golden Globes acceptance speech when she called all of her co-nominees her “category sisters.” Gaga added that she couldn’t have been happier to tie with Close since the veteran actress has been good friends with her mother for years.

Gaga was previously nominated at the 2015 Oscars for Best Song for “Til it Happens to You” (“The Hunting Ground”) alongside Diane Warren. A likely Best Actress nomination for playing singer-songwriter Ally opposite Bradley Cooper‘s Jackson Maine in “A Star Is Born” would be her first Oscar bid for acting. The last Best Actress champ to win on her first career acting nomination was Brie Larson for “Room” (2015).