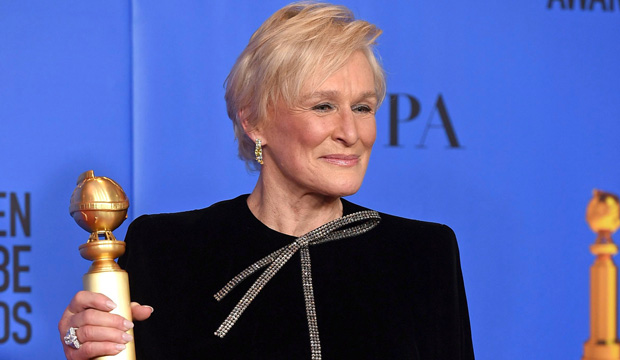 Before she won at the Globes on Sunday, Glenn Close was stuck in third place on our Best Actress Oscar chart. She was way behind the frontrunner Lady Gaga (“A Star is Born”) and fighting for second place with Olivia Colman (“The Favourite”).

While Colman’s win at the Globes on the comedy side was expected, Close’s victory over Lady Gaga was a shocker. Since she pulled off this upset, the six-time Oscar also-ran has been zooming up the chart. She just eclipsed Lady Gaga and now has the best odds to win at the Academy Awards on Feb. 24.

Close has the backing of 12 of our 30 Experts,  8/9 Editors, 14 of our Top 24 (those readers who did best predicting last year’s Oscars), and 13 of our All Stars (the two dozen readers who did best for last 3 years combined). That support translates to leading odds of 18/5.

Rounding out the five predicted nominees are Melissa McCarthy (“Can You Ever Forgive Me?”), who is the pick of 1 Expert,  and Emily Blunt (“Mary Poppins Returns”) who does not have any first-place votes.

Blunt was just snubbed at the BAFTAs, which is not a good sign for this home-grown talent. The other four leading Oscar contenders reaped bids there as did Viola Davis (“Widows”). Could this past Supporting Oscar champ (“Fences) bump Blunt from that fifth slot?

Colman may well have the edge at BAFTA. Her movie dominated the nominations, reaping a leading 12. “A Star is Born” had to settle for seven while Close is the lone representative of her film.