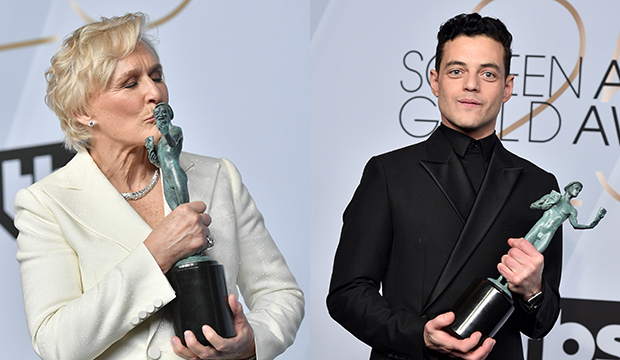 After the same four people became the first quartet to run the table with all the major acting awards last year en route to Oscar gold, it’s refreshing to know that we definitely won’t get that sheep mentality rubber-stamping this year.

The Golden Globe Best Actor champs Christian Bale (“Vice”) and Rami Malek (“Bohemian Rhapsody”) have already split the Critics’ Choice (Bale) and Screen Actors Guild Awards (Malek). Globe and Critics’ Choice supporting actress winner Regina King (“If Beale Street Could Talk”) was snubbed at SAG and BAFTA. And SAG gave its supporting actress statuette to an Oscar snubbee, Emily Blunt (“A Quiet Place”), for the second time in four years, guaranteeing that the four SAG Awards winners — Glenn Close (“The Wife”) and Mahershala Ali (“Green Book”) being the others — won’t all go on to win the corresponding Oscar.

With Blunt’s and King’s snubs, this year would be another forced split, like when Mark Rylance (“Bridge of Spies”) nabbed the supporting actor Oscar over SAG champ and Oscar snubbee Idris Elba (“Beasts of No Nation”) three years ago. Or when Kate Winslet took home the Best Actress Oscar for “The Reader” (2008) after winning the SAG Award in supporting.

Best Supporting Actress notwithstanding, could Oscar diverge from the SAG Awards in another race? Close and Ali are far ahead in their respective categories in our odds, but Best Actor is very tight between Bale and Malek right now, with Bale having the slight edge at 7/2 odds to 71/20.

Here’s how SAG and Oscar have matched up in the past:

SEE If Glenn Close and Regina King win Oscars, it’ll be the 1st time in 13 years that neither is from a Best Picture nominee