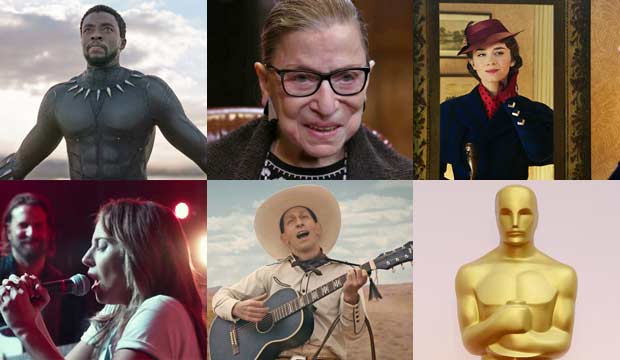 When it comes to the Best Song category, you would think a live show like the Oscar telecast that has been bleeding ratings lately would benefit from showcasing the five nominated songs on the air. Who doesn’t like a good halftime show. But apparently the academy, which continues to waffle over its hosting issues, has now floated the notion that only two of the nominated five songs — “Shallow” from “A Star Is Born,” sung by Lady Gaga and Bradley Cooper, and Kendrick Lamar and SZA’s “All the Stars” from “Black Panther” – will be performed live .

What would get left out in the cold? Jennifer Hudson,  Oscar-vetted  for wailing her way through 2006’s “Dreamgirls” for one. Its her voice that soars on “I’ll Fight” from the Ruth Bader Ginsburg doc, “RBG.” Adding more interest is the fact that is written by Diane Warren, a 10-time nominee who is massively overdue.

What about a twangy country tune? That would be “When a Cowboy Trades His Spurs for Wings,” from the Coen brothers’ Western anthology film, “The Ballad of Buster Scruggs,” sung by actor Tim Blake Nelson and Willie Watson and written by David Rawlings and Gillian Welch. Then there is the melancholy ballad, “The Place Where the Lost Things Go,” sweetly sung by Emily Blunt‘s magical nanny in “Mary Poppins Returns.” I don’t know about you but I rather hear these songs than watch pizza delivered to the stars in attendance or Girl Scouts selling cookies.

This wouldn’t be the first time that the handling of the musical acts led to hard feelings. The producers of the 2009 Oscar show allowed Peter Gabriel just 65 seconds to sing “Down to Earth” from “WALL-E.” Gabriel balked and had John Legend filled in for him. The 2012 Academy Awards show didn’t allow either of the two nominated songs, “Man or Muppet,” from “The Muppets” or “Real in Rio”from the animated film “Rio” to be performed live. It would be the third time none of the songs being honored would be performed, including the infamous year of 1989 when Rob Lowe and Snow White stumbled through a lengthy and awkward production number instead. And, for whatever reason, the nominated songs weren’t heard at all on the 2010 Oscar-cast  when “We Belong Together” from “Toy Story 3” won.

The 2013 ceremony was probably the most infuriating since it allowed host Seth McFarlane plenty of time to croon his inanely insulting “We Saw Your Boobs” song, while only allowing the winning tune, the James Bond theme by Adele, “Skyfall,” to be performed on stage. The other nominees were relegated to a musical montage. And the 2016 show only featured three of the contenders on air — Sam Smith‘s “Writing’s on the Wall” from “Spectre” (the winner), The Weeknd‘s  “Earned It” from “Fifty Shades of Grey” and “‘Til It Happens to You” by Lady Gaga and Diane Warren from the documentary “The Hunting Ground.” When Anohni, a co-writer and performer of the song “Manta Ray” from the documentary “Racing Extinction,” heard it would not be performed, she boycotted the Oscars in protest.

Here is hoping someone figures out that resorting to presenting below-the-line categories during commercial breaks to keep the show at the three-hour mark and playing favorites with nominees to save time is not the best way to celebrate Hollywood’s best.

Will Kendrick Lamar FINALLY get his Grammys coronation with new album 'Mr. Morale and the Big…

BAFTA Experts predictions: Who will win Best Actress? Will 'Dune' dominate below the line?

Grammys 2022: Lady Gaga, Tony Bennett, and more could join list of artists who have won for cover songs