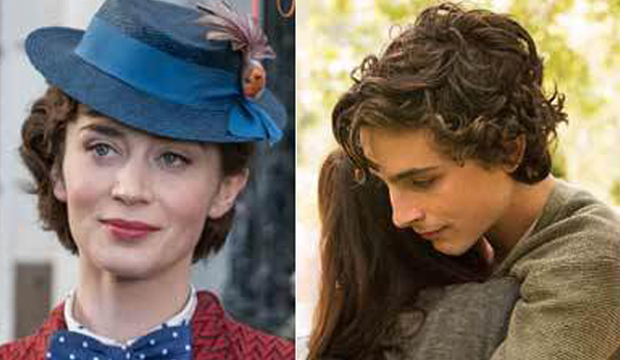 What do Emily Blunt, John David Washington, Margot Robbie and Timothee Chalamet all have in common? Despite being nominated at the 2019 Screen Actors Guild Awards, they were cruelly snubbed at the Oscars on Tuesday. (In Blunt’s case, she was snubbed twice.) If you’re frustrated that your favorites were shunned by Oscar, then it’s time to let them know by casting your own votes for the 2019 Gold Derby Film Awards.

Of course, our awards are the ones that really matter because they’re bestowed by folks like you who truly know their stuff. Gold Derby Awards wins and nominations are now even a part of each contender’s awards history at IMDb. You have until Saturday, January 27 to vote in all 22 film categories — everything from Best Picture to Best Animated Feature to Best Ensemble. As of this writing more than 2,000 Gold Derby readers have cast their votes for the 2019 film awards, so what are you waiting for?

For Best Actress, Blunt (“Mary Poppins Returns”) is the only SAG nominee that didn’t make the cut with the Oscars, and our readers took notice. Instead, the Academy Awards swapped her out with Yalitza Aparicio (“Roma”). The four leading ladies that matched up with both kudos were Glenn Close (“The Wife”), Olivia Colman (“The Favourite”), Lady Gaga (“A Star Is Born”) and Melissa McCarthy (“Can You Ever Forgive Me?”).

SEESassy Oscar nominations reactions from our forums: From ‘They snubbed Timmy!’ to ‘Marina de Tavira yeeeees!’

For Best Actor, Washington (“BlacKkKlansman”) was left on the Oscars’ cutting room floor and seemingly replaced by Willem Dafoe (“At Eternity’s Gate”). The other four men — Christian Bale (“Vice”), Bradley Cooper (“A Star Is Born”), Rami Malek (“Bohemian Rhapsody”) and Viggo Mortensen (“Green Book”) — lined up with both groups, but which five will Gold Derby readers end up nominating?

For Best Supporting Actor, once again we’re back to four mirrored contenders: Mahershala Ali (“Green Book”), Adam Driver (“BlacKkKlansman”), Sam Elliott (“A Star Is Born”) and Richard E. Grant (“Can You Ever Forgive Me?”). Instead of SAG’s fifth pick Chalamet (“Beautiful Boy”), the Oscars opted for Sam Rockwell (“Vice”). Ironically, last year both Chalamet and Rockwell won Gold Derby Awards for “Call Me by Your Name” and “Three Billboards Outside Ebbing, Missouri,” respectively.

The Gold Derby Awards and the Oscars have only agreed 50% of the time for Best Picture over the past 16 years, since our first ceremony. However, it’s now been five years since both groups matched up. The last film to win Best Picture at the Gold Derby Awards and the Oscars was “12 Years a Slave” (2013). The next year we went with “Boyhood” (2014) while the Oscars picked “Birdman.” Then GD users chose “Mad Max: Fury Road” (2015) while the academy voters anointed “Spotlight.” Our next winner was “La La Land” (2016) as opposed to Oscar champ “Moonlight.” And then last year Gold Derby’s best film was “Call Me by Your Name” (2017) while the Oscars’ fave was “The Shape of Water.” Cast your votes now for the 2019 Gold Derby Awards.