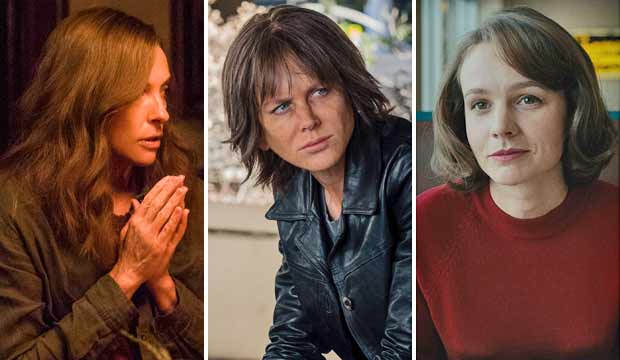 Oscar voting closed on Monday, January 14, so there’s no more changing minds. Que será, será. Whatever will be, will be. But the future is ours to see, dammit! For instance, the 31 Expert journalists we’ve polled have settled on the five likeliest nominees for Best Actress: front-runner Glenn Close (“The Wife”) followed by Olivia Colman (“The Favourite”), Lady Gaga (“A Star is Born“), Melissa McCarthy (“Can You Ever Forgive Me?”) and Yalitza Aparicio (“Roma”).

But is that lineup set in stone? As of this writing there are seven other women who are predicted to earn a bid by at least one Expert each. There are always surprises somewhere on the Oscar ballot, so keep an eye on these dark horse contenders.

Emily Blunt, “Mary Poppins Returns“ (12 Experts) — Blunt is overdue for her first Oscar nomination, and this could be her closest brush with the academy yet. She earned Golden Globe, Critics’ Choice and SAG Award nominations for her role as the title nanny, but it was worrisome when she was snubbed by the BAFTAs since Blunt is a British academy favorite and Mary Poppins is a British icon. Nevertheless, Blunt is within striking distance, ranked sixth in the Experts’ forecasts.

Viola Davis, “Widows” (4 Experts) — Davis has experienced the inverse of Blunt’s Oscar trajectory. She seemed like a slam dunk earlier in the fall: a showy role as a grieving character in an acclaimed film by Oscar winner Steve McQueen (“12 Years a Slave”). But she started to sink in our odds after she and the film missed out at the Globes, SAG Awards and even Critics’ Choice Awards. But unlike Blunt, she was nominated for a BAFTA. Hope springs eternal.

SEENicole Kidman (‘Destroyer’ and ‘Boy Erased’): ‘I’d never been asked to do anything like it’ [Complete Interview Transcript]

Toni Collette, “Hereditary” (2 Experts) — Collette’s performance was loved by critics as soon as the film was released in June, and she has shown up periodically in awards from critics and independent film groups. She was nominated at the Spirit and Critics’ Choice Awards, and she even upset Glenn Close (“The Wife”) to win at the Gotham Awards. Will the Oscars finally nominate her again 19 years after her surprise bid for another horror film, “The Sixth Sense” (1999)?

SEESaoirse Ronan (‘Mary Queen of Scots’): ‘It’s much harder to hate’ someone when you’ve met them [Complete Interview Transcript]

Saoirse Ronan, “Mary Queen of Scots” (1 Expert) — This more traditional costume drama has been somewhat overshadowed by the more offbeat “The Favourite,” but the Oscars love Ronan (she’s already a three-time nominee, and she’s only 24), and the film got a new lease on life when her co-star Margot Robbie earned surprise bids at the SAG and BAFTA Awards. That means the industry has been paying more attention to the film than we initially thought. Can she usurp the throne?

Nicole Kidman, “Destroyer” (1 Expert) — Kidman has been resurgent in recent years including a slew of awards for her role in HBO’s “Big Little Lies.” This year she has Oscar buzz for two different roles, as a conflicted mom in “Boy Erased” and in this wildly against-type role as a haggard LA detective out to settle a score. She picked up a Golden Globe nom for this performance, and the academy might want to honor her at least once for her big year.

Joanna Kulig, “Cold War” (1 Expert) — If there’s one foreign-language performance nominated for an Oscar this year, our Experts think it’ll be the aforementioned Yalitza Aparicio. But don’t count out Kulig, who expressed a gamut of emotions in Pawel Pawlikowski‘s Polish drama about star-crossed lovers. She won Best Actress from the European Film Awards for her trouble.