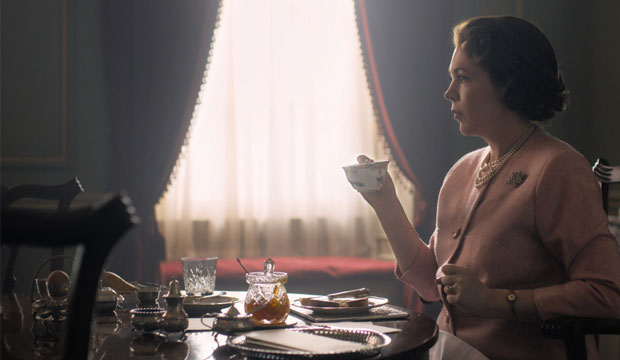 Olivia Colman won an Oscar for playing Queen Anne in “The Favourite.” She may well win an Emmy for portraying one that monarch’s descendants, Queen Elizabeth II, in the upcoming third season of “The Crown.” That part already proved a winner for Claire Foy, who pulled off an upset at last year’s Emmys for her second and final season as the young Elizabeth.

In season three, which is set to stream on Netflix in the spring, Colman takes over as the action moves forward to the late 1960s and 1970s. As you can see above,  she looks remarkably like the Queen, wearing a sensible suit accented by the ever-present strand of pearls while sipping a cup of tea and eating a slice of toast slathered with marmalade.

Replacing Matt Smith as Prince Philip is “Outlander” star Tobias Menzies. Helena Bonham Carter reaped an Oscar bid for portraying the Queen’s mother in “The King’s Speech.” Could she be Emmy bound for her take on the Queen’s sister, Princess Margaret? This is the juiciest of roles as the timeline will include the break-up of her marriage to Anthony Armstrong-Jones (Ben Daniels).

This new cast is signed for two seasons, which are being filmed concurrently. We expect the streaming service to drop the first of these, season 3, just in time for consideration at the 2019 Emmys. Have you made your predictions for this year’s awards? How do you think “The Crown” will do?