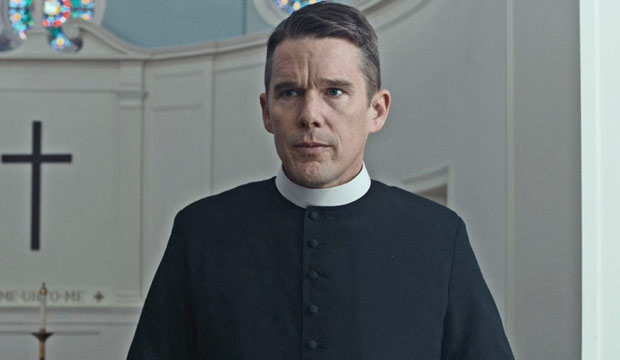 Ethan Hawke is this awards’ season critical darling earning several best actor nods from critic’s groups including the Los Angeles Film Critics Assn. and New York Film Critics Circle for his powerful performance as a troubled clergyman haunted with his past and the future in Paul Schrader’s “First Reformed.”

Hawke, who also won the Gotham Awards honor for best actor, is also nominated for a Critics Choice and a Film Independent Spirit Award but was snubbed in the Golden Globe and Screen Actors Guild Award nominations.

But Hawke, who has received four previously Oscar nominations including for supporting actor for 2014’s “Boyhood,” shouldn’t give up the faith about a fifth nomination. Over the years, the academy has embraced actors and actresses who played members of the clergy with six wins and upwards of two dozen nominations.

Crosby, who like Tracy was a Catholic, received his best actor Oscar for the sentimental 1944 multi-Academy Award-winning “Going My Way.” He was perfectly cast as the affable Father O’Malley, who arrives at his new parish St. Dominic’s Church in New York City and quickly runs into problems with the older, traditional pastor Father Fitzgibbon (Barry Fitzgerald).  For the first and only time in Academy history, Fitzgerald was nominated for best actor and supporting actor as Fitzgibbon and ended up taking home the supporting actor Oscar.

The following year, Crosby and “Going My Way” director Leo McCarey reunited for the sequel “The Bells of St. Mary’s,” for which Crosby received another Oscar nomination as Father O’Malley. Ingrid Bergman also got in the habit and earned an Oscar nomination as Sister Mary Benedict.

Playing Bernadette Soubrious, later canonized St. Bernadette, in the 1943 religious biographical film “The Song of Bernadette” made a star out of Jennifer Jones. She received a lead actress Oscar for her sensitive performance as the young woman who said she saw 18 visions of the Virgin Mary in Lourdes, France and would become a nun at the Sisters of Charity

The 1960 drama “Elmer Gantry,” based on the Sinclair Lewis novel, presents the unholiest of holy men. Burt Lancaster received his only Academy Award for his electrifying performance as the hard-drinking, hard-living con man and traveling salesman who hooks up with a pure revivalist (Jean Simmons) and preaches fire-and-brimstone sermons while leading a less-than-saintly life.

And after being nominated four times previously for an Oscar — 1981’s “Atlantic City, 1991’s “Thelma and Louise,” 1992’s “Lorenzo’s Oil” and 1994’s “The Client” — Susan Sarandon earned the best actress Oscar on her fifth nomination for her haunting portrayal of the real-life Sister Helen Prejean in 1995’s “Dead Man Walking.”