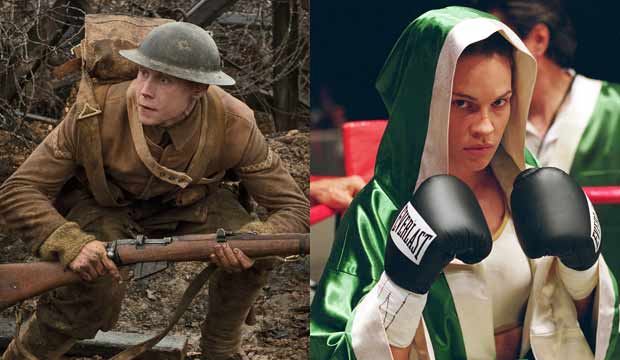 The ambitious World War I film “1917” was a late addition to the Oscar race, not screening for press or industry until late November in advance of its official Christmas release. But the raves for the film proved that it’s the real deal, which means it could be a threat to the current front-runner, Martin Scorsese‘s “The Irishman.” The funny thing is, this wouldn’t be the first time Scorsese suffered an Oscar sucker punch. That also happened 15 years ago when “Million Dollar Baby” beat “The Aviator.”

Releasing prestige films in the fall is usually the most advantageous strategy since it keeps them fresh in awards voters’ minds. Also, you can kill two birds with one stone by combining your awards campaign with the usual pre-release marketing. And movies that win Oscars while still in theaters tend to get a box office bump. But there’s a limit to how late you should release your movie. If voters don’t get a hold of it in time, you might be out of luck no matter how good it is. That may be why only one December release since “Million Dollar Baby” has won Best Picture: “The Shape of Water” (2017).

But “Shape of Water” had been screening for media and industry long before its theatrical release; its world premiere was at the Venice Film Festival that August, so I wouldn’t characterize it as a December surprise. On the other hand, no one was sure exactly what to make of “1917” before its official unveiling right before Thanksgiving, so if it goes on to win Best Picture, that really would make it a rare Oscars ambush at the 11th hour.

There are other striking parallels between 2004 and 2019. In both cases, Scorsese competed with a three-hour epic telling a biographical true story: “The Aviator” was about Howard Hughes, “The Irishman” is about mobster Frank Sheeran. And in both case the usurper was from a filmmaker winning his second Best Director Oscar: “Million Dollar Baby” was Clint Eastwood‘s second victory following “Unforgiven” (1992), and “1917” would be Sam Mendes‘s second win following “American Beauty” (1999).

SEE20-year itch: Sam Mendes could set record for the longest gap between directing Oscar wins with ‘1917’

And of course the Oscars themselves have drastically changed since then, with the expanding academy membership, expanded Best Picture field, and preferential ranked voting for Best Picture that has changed the game completely in recent years. So history may not repeat itself with these two historical dramas after all. Or both films could be overtaken by something else altogether.