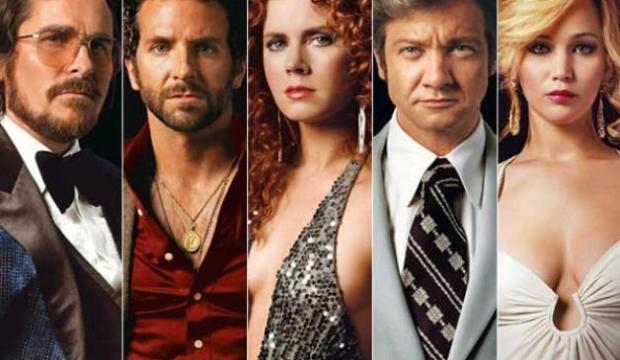 Back in late 2013, David O. Russell’s “American Hustle” premiered to favorable reviews and enthusiastic audience reaction. It was immediately hailed as a serious Oscar contender, challenging frontrunners “12 Years a Slave” and “Gravity.”

While Lawrence was the only cast member to receive an individual SAG nomination, “Hustle” managed to overcome stiff competition to steal the prize for Best Cast in a Motion Picture. Given its success at the Golden Globe and SAG contests, the film appeared to have a real chance at taking the Best Picture Oscar.

For all of its glitz and glamour, “Hustle” left the Dolby Theatre empty-handed. Its best chance at success had appeared to be Best Original Screenplay for Russell and Eric Warren Singer, who lost to “Her” scribe Spike Jonze. Ironically, the announcement was made by “Hustle” featured player Robert de Niro.

Its double-digit defeats did make it the biggest overall loser of the 21st century, tying it with fellow also-rans “Gangs of New York” and “True Grit.” The all-time record is shared by “The Turning Point” and “The Color Purple,” which both went 0 for 11.

But what is even more fascinating about “American Hustle” crashing at the Oscars is the continued trajectory of its stars. To put it simply, “American” alumni have failed to get the gold.

So is there an “American Hustle” curse at the Academy Awards? Let’s take a closer look.

The year after “Hustle,” Bradley Cooper was gunning for the Oscar again as a Best Actor nominee for the Iraq War drama “American Sniper.” His hopes were shot when Eddie Redmayne accepted the award for the Stephen Hawking biopic “The Theory of Everything.” He at least fared better than Amy Adams in the little indie “Big Eyes.” Despite claiming a second consecutive Golden Globe Award for Best Actress in a Motion Picture – Musical or Comedy, she failed to see an Academy Award nomination.

In 2015, a pair of “Hustle”-ites were back in the awards conversation. Jennifer Lawrence was looking at a potential bookend to her Best Actress statuette for “Silver Linings.” And it was for yet another collaboration with Russell, the Miracle Mop dramedy “Joy.” Meanwhile, Christian Bale was also fighting for a companion Oscar to his 2010 trophy for “The Fighter.” This time, it was for his tall performance in the financial crisis farce “The Big Short.”

Both Lawrence and Bale came up short at the big show. Lawrence presumably watched with less than joy when the Academy made room for a new Best Actress champion – Brie Larson in the harrowing kidnapping tale “Room.” Bale was passed over in favor of a fellow Brit – Mark Rylance in the Cold War-set “Bridge of Spies.”

With the arrival of 2016 came another opportunity for a member of the “Hustle” quartet to make a go at the Oscar. Amy Adams in the sci-fi “Arrival” seemed like a safe bet for a nomination after her inclusion at the Golden Globe, Critics’ Choice, SAG and BAFTA awards. She must have alienated the Academy, who overlooked her and gave love to Ruth Negga in the interracial romance-themed “Loving” instead.

This latest awards derby provided the biggest “Hustle” reunion to date. Adams, Bale and Cooper were all initially seen as strong Oscar possibilities. (Easy as A-B-C.) Early frontrunner Cooper in the show biz saga “A Star Is Born” tumbled rapidly after falling to Rami Malek in the Queen extravaganza “Bohemian Rhapsody” at the Golden Globes. Likewise for Adams, whose defeat for the political satire “Vice” by Regina King in the love story “If Beale Street Could Talk” put her on the road to rejection at every subsequent ceremony. (Even when King wasn’t in the court.) As for Bale, his Globe victory for “Vice” in the Musical or Comedy category combined with Critics’ Choice conquest made him a viable candidate. But even he couldn’t survive SAG and BAFTA concessions to Malek, who ultimately nabbed the Oscar.

So how do we explain the tussle over “Hustle?” Is it some sort of curse? Or something even worse?

As an Oscarologist who looks at empirical evidence, I would like to believe that it’s just a coincidence. “American Hustle” featured some incredible talent, whose consistent nominations show that the Academy agrees. Maybe they’ve encountered some bad luck, but that doesn’t mean that we should count them out in the future. Both Adams and Cooper are now unquestionably overdue, and may be hard to deny on their next tries. And Bale and Lawrence are worthy of repeat wins, given the right roles in the proper projects.

In short, there could be a silver linings playbook for David O. Russell and the stars of “American Hustle.”