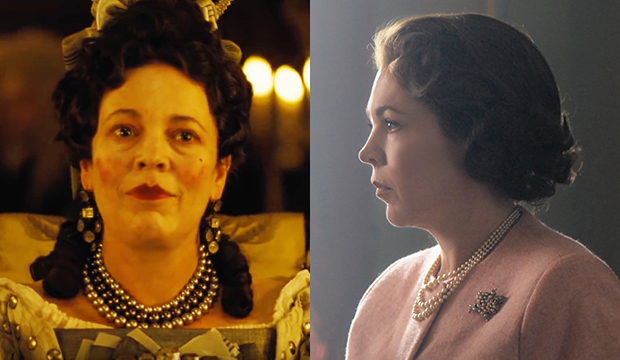 It always helps a potential Academy Award nominee if they feature in a second (or even third) project alongside the one they are hoping to be nominated for. At worst, it helps get their faces out there a bit more and gets a few more Oscar voters to notice them. At best, it helps them garner more votes from the various colleagues they’ve worked with over the two or three projects. It also serves as a timely reminder of their talent, skills, and range.

But which potential female nominees this year have other projects out that could give them a little boost on their way to the Oscar podium – or, at least, to earn that nomination? Let’s take a look:

Olivia Colman: (“The Favourite”) – “Les Miserables,” “The Crown”
Colman has been involved in three period dramas this year, with her acclaimed lead turn in “The Favourite” winning her a Golden Globe for Best Actress in Comedy/Musical, plus BAFTA and SAG nominations (amongst others). She’s behind Glenn Close (“The Wife”) and Lady Gaga (“A Star is Born”) at the moment but, to be honest, it seems like more of a three-way tie in which the Oscar could still go to any of the three women. Colman’s appearances in the TV version of “Les Miserables” and the upcoming Netflix series “The Crown” also raise her profile.

Emily Blunt: (“Mary Poppins Returns”) – “A Quiet Place”
Blunt’s husband John Krasinski called her two performances “range exemplified” and SAG voters agreed, nominating her for both lead (“Poppins”) and supporting (“A Quiet Place”). Blunt will be hoping Oscar voters will feel the same – but she missed out at BAFTA (somehow!), so perhaps both films are a tad too strong, meaning she’s splitting her own votes? Or they’re not quite strong enough? But Blunt’s performances in both are certainly awards-worthy. She’s ranked in the final slot for Best Actress and just outside in seventh for supporting.

Nicole Kidman: (“Boy Erased”) – “Destroyer”
Kidman is another on the periphery, but she’s crept up our supporting actress odds chart (for “Boy Erased”) with precursor awards groups unable to decide who the fifth nomination slot should go to (Margot Robbie, Claire Foy, and Emily Blunt have all been nominated). The academy are big fans of Kidman, however, and nominated her for a similar role in 2017 for “Lion.” Her transformative lead performance in “Destroyer” could further remind voters of her talents.

Regina King: (“If Beale Street Could Talk”) – “Seven Seconds”
King has managed to cling on to the mantle of Best Supporting Actress favorite despite being snubbed at BAFTA and SAG. Her performance in “Beale Street” is stellar, of course, but perhaps her Emmy-winning role in “Seven Seconds” is helping to just about keep her ahead?

Amy Adams: (“Vice”) – “Sharp Objects”
King’s closest competitor, five-time Oscar nominee Amy Adams, also has her own TV drama alongside her own acclaimed supporting role, in “Vice” as Lynne Cheney. Adams also stars in “Sharp Objects,” for which she was nominated for a Golden Globe. And her highly-publicized tie-win with Patricia Arquette (“Escape at Dannemora”) at the Critics’ Choice Awards has certainly helped raise her profile.