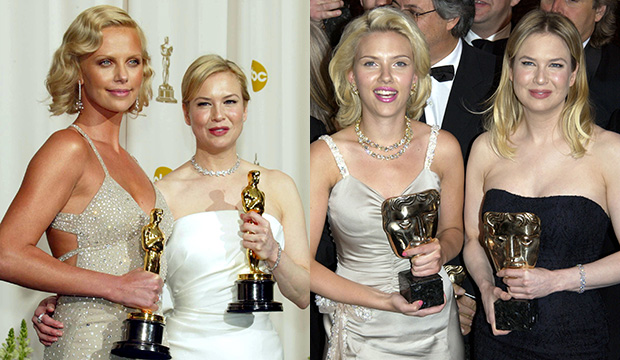 Oscar nominations are still two months away, but the Best Actress race feels pretty solid with top contenders Renee Zellweger (“Judy”), Scarlett Johansson (“Marriage Story”) and Charlize Theron (“Bombshell”) expected to be shortlisted. If it feels like déjà vu, that’s because it is (sort of). These three were the queens of the 2003-04 Oscar season, with two of them ultimately taking home the big prize and one left out in the cold.

Back then, the trio wasn’t all contending in the same category. Theron was in lead for turning into serial killer Aileen Wuornos in “Monster” and Zellweger was in supporting for “Cold Mountain.” Johansson had the first-world problem of two acclaimed performances in a huge breakthrough year with “Lost in Translation” and “Girl with a Pearl Earring.” She was indisputably lead in the latter, so for a while she was campaigned in supporting for “Lost in Translation.” But she received nominations and wins for the film in both categories from various groups, which, in the end, did her no favors as she was snubbed at the Oscars completely.

But Johansson was a strong presence throughout the season. The then-19-year-old starlet bagged two Golden Globe nominations for those films — drama actress for “Girl,” losing to Theron, and comedy/musical actress for “Lost in Translation,” falling to Diane Keaton (“Something’s Gotta Give”). She missed at the Screen Actors Guild Awards entirely, where Theron and Zellweger triumphed, but she got a supporting bid for “Lost in Translation” at Critics’ Choice, won by Zellweger.

The BAFTAs was where Johansson got her big moment. She nabbed double bids in Best Actress for the two films, winning for “Lost in Translation.” Theron was ineligible and competed the following year at the U.K. awards show for “Monster,” but was defeated by Imelda Staunton (“Vera Drake”).

Other than that BAFTA absence, Theron and Zellweger dominated their races that season, culminating with Oscar wins. Zellweger, who was on her third straight nomination then, swept all the major televised precursors: Globe, Critics’ Choice, SAG and BAFTA.

And now, 16 years later, they may all meet again. And with them all in the same category this time, will one of them — or none of them — win? Zellweger is currently in first place in our odds for her comeback performance as Judy Garland. Still awaiting her first Oscar nomination, Johansson is on her heels in second place for her devastating (and devastatingly funny) turn in Noah Baumbach‘s two-hander tale of divorce. And Theron, who has undergone another jaw-dropping transformation to play Megyn Kelly, sits in third place. Saoirse Ronan (“Little Women”) is in fourth and Awkwafina (“The Farewell”) is in fifth.