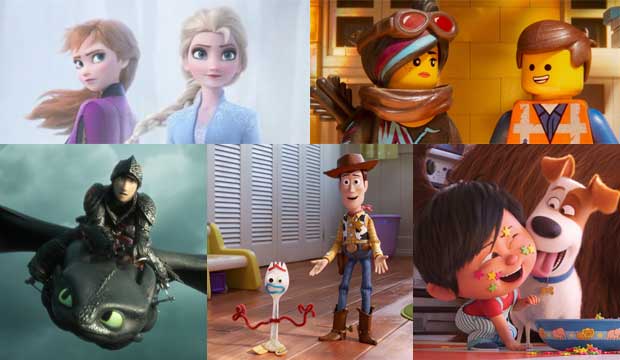 “Toy Story 4” currently leads our Oscar predictions for Best Animated Feature. That’s probably not too surprising since the film comes from Oscar juggernaut Pixar, earned great reviews, and grossed more than $1 billion worldwide. But Oscar voters have shown a bias against animated sequels for as long as the category has been around. That could change this year, however, and the fourth “Toy Story” is only the tip of the spear. There could be more animated sequels nominated this year than ever before.

There have never been more than two franchise follow-ups nominated in the same year. In 2011 the academy nominated “Kung Fu Panda 2” and “Puss in Boots”; the latter wasn’t a sequel, per se, but it was a spinoff of the “Shrek” movies, so it arguably counts. And just this past year both “Incredibles 2” and “Ralph Breaks the Internet” made the cut. “Spider-Man: Into the Spider-Verse” ended up winning, and it’s one of many films that have been made about the web-slinging superhero, but it was a standalone story disconnected from the “Spider-Man” movies that came before it, and its unique style of animation made it visually distinct from all other “Spider-Men.”

This year, however, it looks like there could be three outright sequels in the running — if not more. As of this writing “Toy Story 4” leads our forecasts with 82/25 odds, and it’s immediately followed by “Frozen II” (4/1 odds) and “How to Train Your Dragon: The Hidden World” (5/1 odds). The first “Frozen” (2013) won and both previous “Dragon” films (2010, 2014) were nominated, so both have a strong track record leading into this year’s race.

But that’s not all. “The Secret Life of Pets 2” is also eligible. So is “The Lego Movie 2: The Second Part.” Both films are underdogs with 100/1 odds, probably in part because their predecessors weren’t nominated. But the first “Lego Movie” did earn a songwriting nomination from the academy, and its snub for Best Animated Feature was such a surprise the academy might want to make it up to the franchise. And “Despicable Me 2” (2013) was nominated even after the first “Despicable” movie missed out, so voters aren’t always opposed to showing up late to a party.

However, even the sequels we’re predicting may not be entirely safe. The academy has surprised us before by snubbing toon sequels after nominating or awarding their originals. “Monsters Inc.” sequel “Monsters University” was snubbed. So was “Finding Nemo” follow-up “Finding Dory.” Neither of the “Cars” sequels broke through either. But there may be too many high-profile sequel contenders this year for Oscar voters to deny them all.