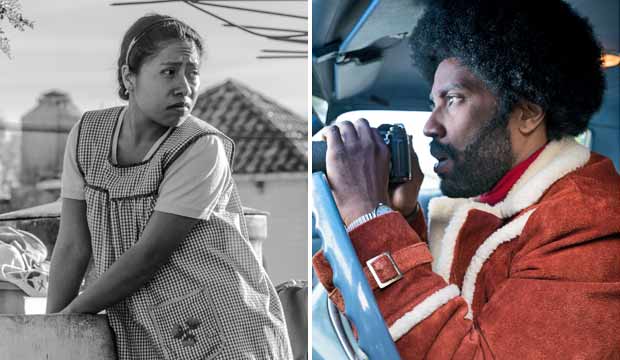 Following its surprise win for Best Picture at the BAFTAs, “Roma” has solidified its status as the Oscar front-runner according to our current Gold Derby racetrack odds. Although “Roma” has been out front for weeks, the take-down of “The Favourite” on its home turf led many to believe this race may finally be over. But not so fast!

Ever since the Oscars implemented that tricky preferential ballot, there is much more data to consider. Let’s take a look as I break down why I think “BlacKkKlansman” could be on track to pull off a shocker on Sunday.

Since Best Picture has only been decided by a preferential ballot since 2009, I’ll stick with the last nine years of history to gauge more relevant information. I’ve considered each of the major precursor awards as well as critical Oscar nominations that frequently coincide with a Best Picture winner. One thing has been bulletproof in recent years: Every Best Picture winner has been nominated for a screenplay award. If we take that statistic seriously, throw out “Black Panther” and “Bohemian Rhapsody” from your top spot. From here on out, there have been exceptions to every rule.

The next two most important statistics are nominations for directing and editing. Eight out of the last nine winners have been nominated in both. That is the first red flag for “Roma,” which missed out on an editing nomination. “BlacKkKlansman,”  managed to snag both, but lost ground for its lack of a cinematography nomination, of which six of the last nine Best Picture winners achieved.

The next major blow to “Roma” came from the Screen Actors Guild, which neglected it completely. Every film other than last year’s champ, “The Shape of Water,” has been nominated for a SAG Ensemble award, but even “The Shape of Water” had two individual nominees at the SAG Awards. Meanwhile, “BlacKkKlansman” did get that all-important ensemble bid from the actors guild, putting it in comfortable position to pull off a Best Picture win.

In better news for “Roma,” it took home the top award from the DGA, which has coincided with Best Picture winners in six of the last nine years. It also won the top prize from Critics Choice and was nominated at PGA (that prize went to “Green Book”). Keeping itself in the race, “BlacKkKlansman” was at least in the running with nominations at DGA, PGA, Critics Choice, BAFTA and the Golden Globes.

While the summation of those awards may seem to heavily favor “Roma” to win Best Picture, the statistics actually give the slight edge to “BlacKkKlansman.” The lack of an editing nomination in addition to being completely snubbed by SAG is such a statistical blow that a “Roma” win would be unprecedented. The fact that it would be the first foreign language film to win is already a major obstacle for the film. Can “Roma” actually break all of these rules? Or will “BlacKkKlansman” finally come out on top when it matters most? Below is how this year’s Best Picture nominees rank based on their statistical likelihood of winning.

Be sure to check out how our experts rank this year’s Oscar contenders. Then take a look at the most up-to-date combined odds before you make your own 2019 Oscar predictions. Don’t be afraid to jump in now since you can keep changing your predictions until just before winners are announced on February 24