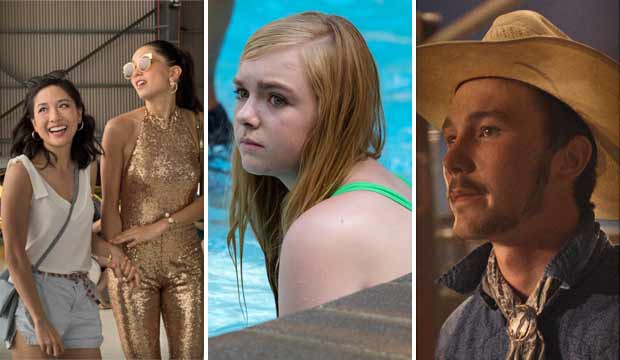 What films do our 31 Oscar Experts think will be nominated for Best Picture? Under current voting procedures, there could be anywhere between 5 and 10 nominees, but since that system was established in 2011 there have always been either eight or nine contenders, so that’s probably what we can expect this year too.

At Gold Derby you can predict up to the maximum 10 nominees, and our Experts have reached a consensus about what those likeliest 10 films are: front-runners “A Star is Born” and “Roma” followed by “Green Book,” “The Favourite,” “Black Panther,” “BlacKkKlansman,” “Vice,” “If Beale Street Could Talk,” “First Man” and “Bohemian Rhapsody.”

Is there room for any other films to break through? The following eight films are predicted by at least one of our Experts to pull off an Oscar nominations surprise.

“Mary Poppins Returns” (10 Experts) — 54 years ago the original “Mary Poppins” earned 13 nominations including Best Picture, and the sequel got off to a good start with top nominations at the Golden Globes and Critics’ Choice Awards. However, the Disney hit was snubbed at the Producers Guild Awards and was missing from top categories at the BAFTAs. Those are worrisome results because those prizes are decided by industry insiders just like the Oscars are. But our Experts think it’s still on the bubble, so there’s nowhere to go but up.

“A Quiet Place” (5 Experts) — Horror movies about monsters with super-hearing don’t usually scream Oscar — they shouldn’t scream anything if they don’t want the monsters to find them. But last year’s windfall for “Get Out” opened the door for contemporary horror films, and “A Quiet Place” had a similar combination of rave reviews and big box office. Most importantly, it earned a Producers Guild nomination for Best Picture, which, as mentioned above, is often a strong indicator of Oscar.

“Can You Ever Forgive Me?” (3 Experts) — This biographical drama about author Lee Israel (played by Melissa McCarthy) selling counterfeit letters to literary collectors has been a consistent nominee for its performances and its adapted screenplay at the Golden Globes, Critics’ Choice Awards, SAG Awards, Writers Guild Awards and BAFTAs. It’s a little surprising that a film with so much consistent awards attention hasn’t made any appearances in Best Picture lineups. But if the academy likes its performances and script so much, don’t be too surprised if it sneaks into the top category too.

“Eighth Grade” (2 Experts) — The academy has loved A24 in recent years, as evidenced by the studio’s recent Oscar winners like “Room” (2015) and “Moonlight” (2016) and five-time nominee “Lady Bird” (2017). This film about a 13-year-old girl’s awkward last week of middle school hasn’t had as strong an awards track record as those films, but it has been a darling of the Gotham and Independent Spirit Awards, it made the American Film Institute’s list of the year’s 10 best films, and breakthrough writer-director Bo Burnham was nominated at both the Directors Guild and Writers Guild Awards, so this acclaimed indie darling is still in the thick of it.

“Widows” (2 Experts) — This heist drama was loved by critics. It was directed by Oscar winner Steve McQueen (“12 Years a Slave”). It was co-written by prestigious author Gillian Flynn (“Gone Girl,” “Sharp Objects”). And it boasts an A-list ensemble cast led by Oscar winner Viola Davis. How could this not be an Oscar contender? But it has underperformed on the awards circuit, shut out completely at the Golden Globes and SAG Awards. That could be due to the film’s somewhat disappointing box office box office, but the Oscars might decide to ignore commerce and embrace it anyway.

“First Reformed” (1 Experts) — Critics have kept this film alive all awards season, especially when it comes to Ethan Hawke‘s lead performance as a priest experiencing a personal crisis after counselling a parishioner over fears of climate change. Like “Eighth Grade,” this is an A24 film that has been embraced by the AFI, Gotham and Spirit Awards. Writer-director Paul Schrader has shockingly never been nominated for an Oscar despite past credits that include “Taxi Driver” and “Raging Bull,” so it’s possible the academy will make it up to him by fully embracing his latest film.

“The Rider” (1 Expert) — One of the most acclaimed films of 2018, this drama about a bull-rider recovering from a near-fatal injury was so loved that it earned a Spirit Award nomination for Best Feature months before it was released commercially. Since then it upset “First Reformed,” “If Beale Street Could Talk” and “The Favourite” by winning Best Feature at the Gotham Awards, and it surprised again by winning Best Picture from the National Society of Film Critics. But does it have a high enough profile to have reached Oscar voters? Its track record suggests that the only thing it needs to be a Best Picture nominee is for enough academy members to have seen it.