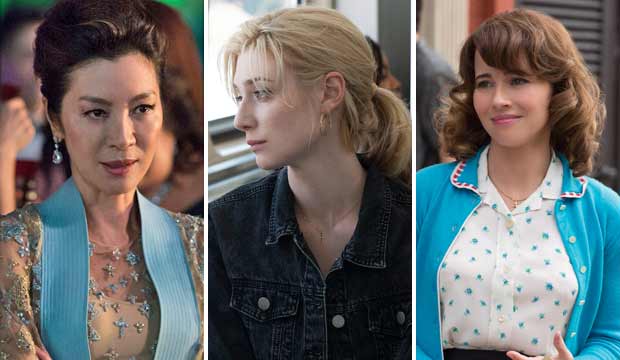 There may be no Oscar acting race where the Expert journalists we’ve polled are more divided than Best Supporting Actress. Most of them currently agree on the front-runner, Regina King (“If Beale Street Could Talk”), but there are 13 other women they think could be nominated. The four likeliest to join King are Amy Adams (“Vice”), Emma Stone and Rachel Weisz (“The Favourite”) and Claire Foy (“First Man”). But who has the best chance to crash the party?

The following nine women are waiting in the wings, and each of them has a chance to get in according to at least one of our Experts. Who do you think we’re foolishly underestimating?

Michelle Yeoh, “Crazy Rich Asians” (6 Experts) — As the disapproving matriarch of a wealthy Singapore family, Yeoh stands out from the ensemble cast, especially given her impressive career as a whole. She hasn’t received many individual plaudits for this performance, but she’s nominated at the SAG Awards with the rest of the ensemble cast, which shows how much support there is from the industry for this groundbreaking Asian-led romantic comedy.

Nicole Kidman, “Boy Erased” (5 Experts) — Kidman is a dark horse contender both here and in Best Actress for her starring role as an LA detective in “Destroyer.” But this might be her better chance at a bid. In “Boy Erased” she plays a conflicted mother who sends her gay son to conversion therapy. She has been recognized by a few regional critics groups and the Critics’ Choice Awards so far. And she’s been nominated for four Oscars, winning for “The Hours,” so we know the academy loves her.

SEEMichelle Yeoh (‘Crazy Rich Asians’): Asian actors ‘should be able to be getting more roles like this’ [Complete Interview Transcript]

Emily Blunt, “A Quiet Place” (3 Experts) — Campaigning in the supporting race for this film — partly to avoid conflicting with “Mary Poppins Returns” in the leading category — might have been a savvy choice. She earned a surprise SAG Award nomination for her role as a pregnant mother hiding from monsters. Blunt is overdue for an Oscar nomination after years of noteworthy performances, and with two prominent film roles this year the academy may be twice as eager to finally give it to her.

Marina de Tavira, “Roma” (2 Experts) — “Roma” is a rare character-driven film that’s doing gangbusters in awards races for Best Picture and Best Director but struggling to make headway in acting races. Leading lady Yalitza Aparicio is on the bubble for a Best Actress nomination, but de Tavira has been largely overlooked for her role as Aparicio’s employer, a middle class wife and mother in a crumbling marriage. But if “Roma” is as big a Best Picture contender as we think it is, the actors branch may surprise us by bringing its cast members along for the ride.

Elizabeth Debicki, “Widows” (1 Expert) — Holding your own against Viola Davis is no small feat, and Debicki has been praised for doing just that as a woman who learns what she’s capable of after she’s roped into a daring heist. She has received numerous nominations from regional critics’ organizations across the country, including the prestigious National Society of Film Critics. But the film has underperformed with industry groups like the SAG Awards, where it was shut out, and the BAFTAs, where only Davis received a nom. However, maybe the academy noticed her breakthrough performance just like the critics did.

Margot Robbie, “Mary Queen of Scots” (1 Expert) — When looking for awards, it never hurts to play Queen Elizabeth I. Helen Mirren won an Emmy for the royal role. Judi Dench won an Oscar. Cate Blanchett earned two Oscar nominations. Now Robbie might be on her way to a nomination of her own. Her surprise SAG Award bid bodes well, and so does her subsequent BAFTA nom.

SEEThomasin McKenzie (‘Leave No Trace’): ‘It’s important to look at someone and try to see their goodness’ [Complete Interview Transcript]

Thomasin McKenzie, “Leave No Trace” (1 Expert) — This category has often been hospitable to young actresses, from winners Tatum O’Neal (“Paper Moon”) and Anna Paquin (“The Piano”) to nominees like Saoirse Ronan (“Atonement”) and Hailee Steinfeld (“True Grit”). And McKenzie has earned Critics’ Choice, Gotham and Indie Spirit Award bids for her role as a teen living off the grid with her traumatized dad. Also, her film’s director Debra Granik previously helmed another film, “Winter’s Bone,” that launched a young actress to an Oscar nomination and stardom — someone by the name of Jennifer Lawrence.

Linda Cardellini, “Green Book” (1 Expert) — The love story in “Green Book” is really the budding friendship between mismatched Viggo Mortensen and Mahershala Ali as they embark on a road trip through the Jim Crow South. But Cardellini gives the film much of its warmth as Mortensen’s wife back home. The film is a likely nominee in many top categories including Best Picture, so that affection could carry over to her.

Blythe Danner, “What They Had” (1 Expert) — Danner is a beloved industry veteran, but she has never been nominated for an Oscar. She’s long overdue for recognition, so even though this film didn’t make a big impact when it was released in November, voters may remember her performance as a family matriarch beginning to succumb to Alzheimer’s disease. Julie Christie earned a nomination for playing a character with that illness in “Away from Her,” and Julianne Moore won for portraying the ailment in “Still Alice.”