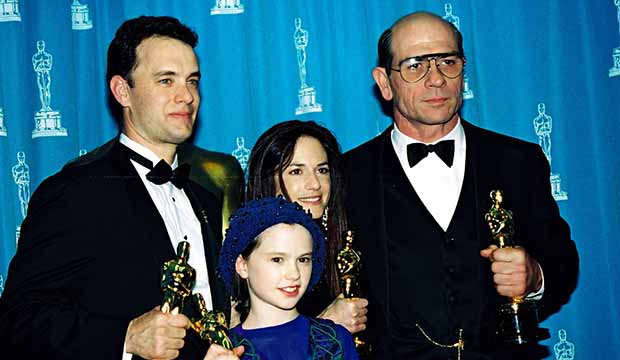 For this year’s Oscars ceremony on Sunday, “Black Panther” is the first motion picture based on a comic book to receive a nomination in the Best Picture category. “Roma” could very well become the first foreign-language film to win in that same category. And as the years go by, it’ll be difficult to remember that there was ever a time that these things weren’t part of the norm. Remember a time when Tom Hanks had never won an Oscar and was more well-known for his comedy roles? When people didn’t like to speak about AIDS, much less make a feature film about it? Or a time when the great Steven Spielberg had yet to hold the gold statue in his hand? And when a woman or an African-American person had never hosted the annual telecast solo? It’s hard to believe that 25 years have passed since all these events became part of our culture at the 1994 ceremony.

Through Oscar’s illustrious past, there’s been a long list of terrific hosts — Bob Hope, Johnny Carson and Billy Crystal among the best. However, the Academy opted for a fresh face in 1994 when Crystal decided to take a break from the gig. Whoopi Goldberg became the first woman AND the first African-American to host the Academy Awards ceremony solo. She joked, “The host is wearing a dress… And I want to put a rumor to rest. I did not get this gig because I am Sidney Poitier’s daughter… I got it because I seem to cross so many ethical and political lines.” Although her comedy can be controversial, she became a popular choice and came back to host three more times (in 1996, 1999 and 2002).

Before his moving turn in “Philadelphia”, Hanks was largely known for his comedic roles. Having begun his career on the sitcom “Bosom Buddies”, Hanks went on to big screen stardom for the 1980s movies “Splash,” “The Money Pit” and “Big” (for which he received his first nomination). There were a few dramas thrown in over the years, but his forte seemed to lie with comedy. However, that changed with his role as lawyer Andrew Beckett.

Based on real events, the character is a gay man who has contracted AIDS and is fired from his law firm. He hires a homophobic lawyer (played by Denzel Washington) to bring on a wrongful dismissal case. “Philadelphia” is considered by many to be the first major motion picture to bring awareness the issue of AIDS and to lessen the stigma associated with it. Hanks lost 30 pounds for the role to appear gaunt, and received much critical praise for his sympathetic turn. In his acceptance speech, he thanked a former teacher, who was gay. This later became the basis for the movie “In and Out”, in which an actor inadvertently outs a teacher during an acceptance speech. And the next year, the former mainly comedic actor became only the third person to win back-to-back Oscars in an acting category (for “Forrest Gump”).

This year marked quite a few landmarks in the acting categories, including being first time wins for all four champions in the acting categories. Holly Hunter not only won Best Actress for “The Piano” but also became one of only 11 people who have been nominated in two different acting categories in the same year — she was also up for supporting for “The Firm.” And she wasn’t the only actress to accomplish this feat that same year. Emma Thompson received dual nominations for “The Remains of the Day” (Best Actress) and “In the Name of the Father” (Best Supporting Actress).

These dual nominations weren’t the only interesting aspects in the actress categories. In a surprise upset over Winona Ryder for “The Age of Innocence”, 11-year-old Anna Paquin won for her supporting role in “The Piano”. Paquin, who was not a even professional actress at the time, became the second youngest winner in Oscar history, 20 years after Tatum O’Neal had become the youngest at age 10. To round out the acting categories, Tommy Lee Jones won on his second nomination in Best Supporting Actor for “The Fugitive.”

And, finally, who today can imagine Spielberg without having “Academy Award Winner” as part of his description? His career included the box office hit “Jaws,” and he had received Oscar nominations as producer and/or director for such classics as “Close Encounters of the Third Kind”, “Raiders of the Lost Ark”, “E.T. the Extra-Terrestrial”, and “The Color Purple.” It seemed the Academy was content to let him receive his awards in box office receipts. However, they could no longer let him go unrewarded with the compelling “Schindler’s List”. The true story of businessman Oskar Schindler, who chose to save over 1,000 Polish Jews over financial gain, is a deeply moving testament to the human spirit. Filmed primarily in stunning black-and-white, the image of the little girl in the red coat is a haunting image. “Schindler’s List” won seven of its 12 nominations, with Spielberg triumphing with not one but two statues – as Best Director, and as part of the producers for Best Picture.

It was a great year for Spielberg. In addition to “Schindler”, his blockbuster hit “Jurassic Park” won all three of its nominations, for Best Sound, Best Sound Effects Editing, and Best Visual Effects. Two vastly different films, both are considered modern day classics, with “Schindler’s List” showing up on many “Best Films Ever” lists, and “Jurassic Park” spawning a series of sequels that remain popular today.

And so on this 25th anniversary of its broadcast, the 66th Annual Academy Awards still remains a memorable ceremony. Two of film’s living legends received their first statues on that night, a trio of actresses had a memorable evening and a black female comic paved the way for a variety of hosts. What moments from this Sunday will make their way into Oscar history?