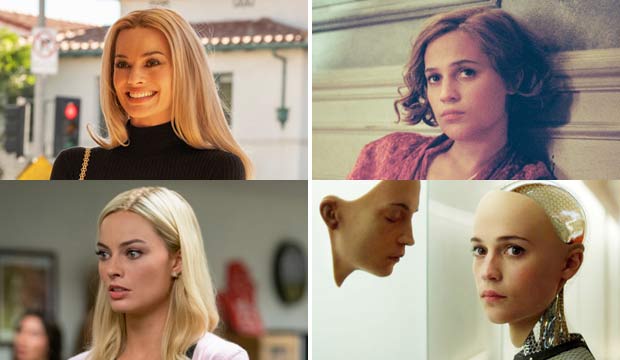 Will Margot Robbie earn an Oscar nomination for Best Supporting Actress? If so, will it be for “Once Upon a Time in Hollywood” or “Bombshell”? Academy rules prohibit an actor from being nominated twice in the same category. But maybe it doesn’t matter. Having two roles getting attention in the Oscar race could lead to a victory no matter which one you’re actually nominated for. Just ask Alicia Vikander.

Vikander was one of the breakout stars of 2015, showing up in a handful of films including “The Man from U.N.C.L.E.” and “Burnt,” but the two she got the most attention for were “The Danish Girl” and “Ex Machina” in which she played the wife of a transgender artist and a robot, respectively. Critics were most fond of her role in “Ex Machina” — that performance won her prizes from Los Angeles, Chicago and many other regional journalist groups — but industry groups favored “The Danish Girl.”

Even though she was basically a co-lead with Eddie Redmayne in “Danish,” she earned a supporting nomination at the Oscars, and she won. But she might not have won for “Danish Girl” were it not for the additional support she had received all year for “Ex Machina.” I think the one-two punch probably would have won her the Oscar no matter which film she had gotten in for.

That could be good news for Robbie. The Oscars love to reward startlets in their 20s, especially when they’ve already proven themselves as “Serious Actresses.” Robbie broke out in the Best Picture-nominated “The Wolf of Wall Street” (2013). Then she earned a Best Actress nomination for “I, Tonya” (2017) and probably came pretty close to a Best Picture nomination of her own as a producer of “I, Tonya.”

Now she has two high-profile roles: one as real-life doomed starlet Sharon Tate in “Once Upon a Time in Hollywood” and as the composite character Kayla in the Fox News satire “Bombshell.” “Once Upon a Time” ranks higher in our current odds for Best Picture, and Robbie plays an iconic figure, so on paper that seems like the likelier choice for a nomination. But her role in that film is largely symbolic and doesn’t give her the kinds of meaty emotional scenes you usually need to win Oscar.

“Bombshell” gives her more of an opportunity to flex her acting muscles, but she’s the only main cast member who isn’t playing an actual biographical role, and at the moment the film doesn’t look as strong in the Best Picture race as “Once Upon a Time” does. But no matter which film she’s nominated for, there’s no doubt both films will be on voters’ minds.

However, having multiple films in the Oscar race can be a double-edged sword. In 2003 Scarlett Johansson had breakthrough leading roles in both “Girl with a Pearl Earring” and “Lost in Translation.” She was campaigned in the supporting race for “Translation” to avoid splitting her votes, but that might have confused voters even more, so she was snubbed for both. In 2010 Leonardo DiCaprio had starring roles in “Shutter Island” and “Inception”; he was snubbed at the Oscars even though “Inception” was nominated for Best Picture.

And in 2011 it seemed like Jessica Chastain was in every other movie released in theaters, but the one that got her the Best Supporting Actress Oscar nom (“The Help”) ended up being the one where she was up against a much more prominent co-star she couldn’t beat (Octavia Spencer).

So Robbie will need to hope that a consensus forms around her performances the same way it did for Vikander, who managed to win instead of cancelling herself out. Robbie has ranked among our top five contenders for Best Supporting Actress for “Once Upon a Time” since we opened our predictions in August. As of this writing she ranks fifth with 9/1 odds. But she has rapidly been rising for “Bombshell” since it started screening for the press, and that performance currently places her seventh with 20/1 odds. Make or update your own predictions right here to let us know what you think.