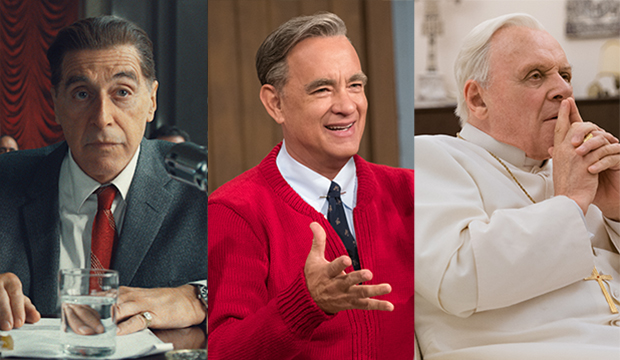 Al Pacino (“The Irishman”), Tom Hanks (“A Beautiful Day in the Neighborhood”) and Anthony Hopkins (“The Two Popes”) are all predicted to make the Best Supporting Actor Oscar lineup in our odds, sitting in second, third and fifth place, respectively. It’d be notable if they all do because all three ’90s Best Actor winners haven’t been nominated in a very, very long time, and if any of them prevails, he’d be one of the few men who’ve swept both acting categories.

Just like on the women’s side, only six men have claimed Best Actor and Best Supporting Actor:

Nicholson and Hackman are the only ones who first won in lead before adding a supporting statuette, which is what Pacino, Hanks and Hopkins are trying to do.

An eight-time nominee, Pacino hasn’t been shortlisted since he finally won his long-awaited Oscar for “Scent of a Woman” (1992), 20 years after his first bid, in supporting, for “The Godfather” (1972). He was nominated that same year in supporting for “Glengarry Glen Ross,” losing to Hackman, and is one of 11 performers with double nominations in the same year. As notorious Teamster head Jimmy Hoffa in “The Irishman,” Pacino turns in one of his best performances in years, and it’s the flashiest one in the gangster epic. He could also get bonus points for his brief but memorable turn in “Once Upon a Time in Hollywood.” Five Experts and four of our Editors are predicting him to win.

Hanks is the most recent nominee of the trio, having last been nominated this century, for “Cast Away” (2000), but he’s had some bad luck with the academy as of late. His was shockingly snubbed for “Captain Phillips” (2013) after hitting every precursor, while his other film that year, “Saving Mr. Banks,” for which he contended in supporting, had little traction. “Sully” (2016) also failed to lift off with the academy, and he was left out in the cold while his co-stars, Mark Rylance and Meryl Streep, were nominated — and in Rylance’s case, won — for “Bridge of Spies” (2015) and “The Post” (2017), respectively. But perhaps the nicest guy in Hollywood playing the ultimate nice guy, Mister Rogers, in “Neighborhood” will do the trick. A five-time nominee and two-time Best Actor champ for “Philadelphia” (1993) and “Forrest Gump” (1994), Hanks is seeking his first bid in supporting. A win would make him the fourth man to score three acting Oscars after Nicholson, Walter Brennan and Daniel Day-Lewis.

Hopkins’ Oscar history has been the opposite of Pacino’s, as he won on his maiden nomination for his indelible Hannibal Lecter in “The Silence of Lambs” (1991). He quickly amassed three more bids in short succession for his lead turns in “The Remains of the Day” (1993), falling to Hanks, and “Nixon” (1995), and his supporting performance in “Amistad” (1997), which was his last nomination. A two-hander focusing on Hopkins’ Pope Benedict XVI and Jonathan Pryce‘s future Pope Francis, “The Two Popes” was an unexpected favorite on the festival circuit, surprising audiences with its humor as its two stars played off of each other. Hopkins will be 82 by the time of the ceremony and would become the second oldest acting winner ever, behind Christopher Plummer, who was also 82 when he won for “Beginners” (2011), but his Dec. 13 birthday to Hopkins’ Dec. 31 one — not to mention the earlier Oscar date — makes him a smidge older.

All three will have to derail Brad Pitt (“Once Upon a Time in Hollywood”), who continues to top our leaderboard. Willem Dafoe (“The Lighthouse”) is in fourth place.