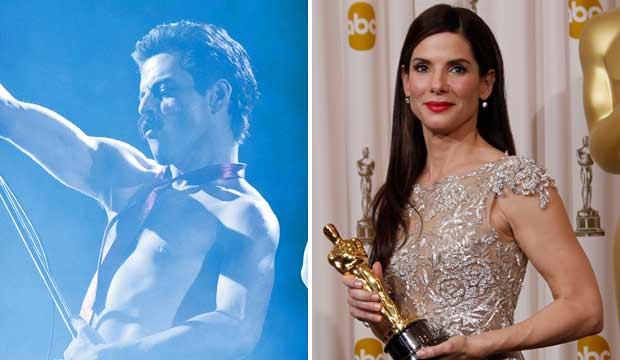 Rami Malek just won a Golden Globe for his performance as Queen frontman Freddie Mercury in “Bohemian Rhapsody.” That wasn’t a surprise — our odds were predicting it. But the film’s subsequent victory for Best Film Drama was arguably the biggest upset of the night. The film has been exceeding our expectations throughout the awards season, and with this latest windfall I’m starting to wonder if Malek is on his way not just to an Oscar nomination, but to a win. He’s following a trajectory similar to Sandra Bullock‘s when she won Best Actress for “The Blind Side” (2009).

Like “The Blind Side,” “Bohemian Rhapsody” tells a true story. Oscars love that. But neither film got a lot of love from critics. “The Blind Side” scored 53 on MetaCritic and 66% freshness on Rotten Tomatoes. Those numbers are comparable to “Rhapsody,” which has 49 on MC and 62% on RT — a decidedly mixed reception, especially for an awards contender.

But if there’s one thing Hollywood loves, it’s a Cinderella story at the box office. “The Blind Side” was a sleeper hit, grossing $255 million domestically and $309 million worldwide against a mere $29 million budget. Coupled with another Bullock hit that same year, “The Proposal,” it gave the actress a golden glow the academy couldn’t resist after almost two decades of reliable work from the star of “Speed” (1994), “While You Were Sleeping” (1995) and Oscar winner “Crash” (2005).

“Rhapsody” is an even bigger hit. It was a little more expensive to produce ($52 million), but the payoff has been much greater. As of this writing it has made $193 million domestically and an astronomical $743 million worldwide. It’s the highest grossing LGBT movie of all time and the highest grossing music biopic too — all this after a troubled production that led to the firing of director Bryan Singer before shooting was completed. In that case it’s even more of a Cinderella story for the film, which also helps distance it from the allegations of sexual misconduct that have been made against Singer since long before the #MeToo movement gained momentum.

SEELoved by Oscars, not by critics: Can ‘Bohemian Rhapsody’ follow in footsteps of ‘The Reader,’ ‘Iron Lady’ and more?

Rami Malek isn’t an established movie star the way Bullock was when she won, but he has two things she didn’t have. First, Freddie Mercury is a better known public figure than Bullock’s character, football mom Leigh Anne Tuohy, which gives Malek the opportunity to transform himself in a way that is catnip to the academy. Second, “Bohemian Rhapsody” is doing much better at this point in the awards derby than “The Blind Side” was.

Though “The Blind Side” ended up with a Best Picture nomination in addition to Bullock’s eventual win for Best Actress (that was the first year of the expansion of the top category to 10 nominees), it hadn’t even been nominated for Best Film Drama at the Globes, let alone won it. It also didn’t receive a bid for its ensemble cast at the SAG Awards, and it wasn’t recognized by the Producers Guild either. “Rhapsody” has accumulated all of those plaudits. So maybe Malek is an even stronger front-runner than Bullock was.

SEE2019 Oscars: 5 reasons why ‘Bohemian Rhapsody’ will do better than we are predicting

If that’s the case, though, our racetrack odds haven’t quite caught up to that fact, at least not yet. Malek has been on the rise since “Rhapsody” was released in November, but he currently ranks third in our combined forecasts with odds of 9/2 behind front-runner Bradley Cooper (“A Star is Born“) and second-place Christian Bale (“Vice”).

That could change, though. There are currently six Expert journalists betting on a Malek victory at the Oscars: Thelma Adams (Gold Derby), Edward Douglas (Weekend Warrior), Tariq Khan (Fox TV), Alicia Malone (Turner Classic Movies), Michael Musto (NewNowNext) and Tom O’Neil (Gold Derby). Of those six, four updated their Oscar predictions since January 6, the day of the Globes. That may be evidence that the tide is turning.