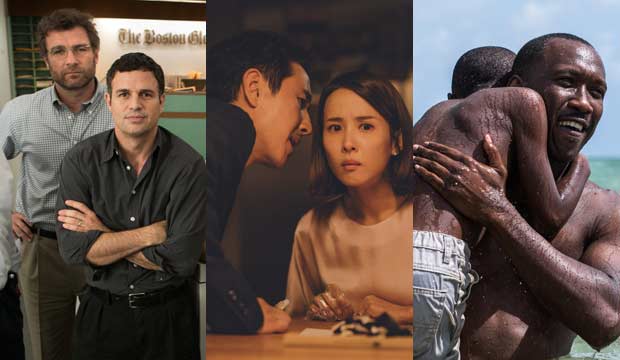 The Mexican film “Roma” couldn’t win Best Picture at the Oscars despite a leading 10 nominations and its director Alfonso Cuaron cruising to a Best Director victory. If that foreign-language film couldn’t win under such circumstances, how could South Korea’s “Parasite” this year? Or so the conventional wisdom goes. But I’ve been thinking, is that even the right comparison?

When it comes to the journey from the art house to the Oscar stage, I think “Parasite” might have more in common with “Spotlight” or “Moonlight,” both of which won Best Picture in major upsets. Here are seven reasons I think it could succeed like those films rather than fall short like “Roma.”

“Roma” was a meditative film drawn from Cuaron’s memories of his beloved housekeeper and wasn’t driven by a lot of plot. On the contrary, “Parasite’s” twists and turns make it the cinematic equivalent of a page-turner with familiar elements of comedy and thriller. That may make it more accessible to academy members at large a lot like how “Spotlight” was a serious drama but also an edge-of-your-seat investigative mystery. Not to take anything away from “Roma’s” achievements, but if that film was like eating your cinematic vegetables, “Parasite” is like dessert.

2. It has timely themes

Don’t get me wrong, “Roma” had a lot to say about class, but its approach was very specific to the cultural and political conditions of its setting: Mexico City in the early 1970s. “Parasite” on the other hand is contemporary, and its story of a poor family infiltrating a rich household could easily translate — no pun intended — to an American milieu, or to various other settings around the world.

In an election season with income injustice foregrounded by candidates like Bernie Sanders and Elizabeth Warren, this film speaks perhaps even more directly to the current moment than “Spotlight” (about the heroism of journalists uncovering child sex abuse in the Catholic Church) and “Moonlight” (about growing up black and gay in a repressive society).

3. Other top contenders may be a case of been-there-done-that

“The Irishman” is being lauded as a great mob movie, but the academy has lauded great mob movies before (“The Godfather,” Martin Scorsese‘s own “The Departed”). Similarly, “Once Upon a Time in Hollywood” is a nostalgic film about show business following other nostalgic Oscar winners about show business (“The Artist,” “Argo”). “1917” is a war movie, and of course we’ve seen tons of those celebrated at the Oscars. The divorce drama “Marriage Story” follows “Kramer vs. Kramer.” And the offbeat “Jojo Rabbit” is hardly the first movie to take potshots at the Nazis.

The genre-bending “Parasite” is the discovery of the bunch, the one that might elicit the most passion. That might have helped “Moonlight” beat the throwback musical “La La Land.”

4. It could be an alternative consensus pick against juggernaut rivals

“Spotlight” beat the most nominated film of the year (“The Revenant” with 12), and “Moonlight” beat the most nominated film of all-time (“La La Land” tied the record with 14). Both “Revenant” and “La La Land” may have been hurt by all their hype, and any kind of backlash can really hurt you on a preferential ballot like the one that decides Best Picture. This year there’s a good chance “The Irishman” and “Once Upon a Time in Hollywood” will lead the nominations and have targets on their backs.

If a voter thinks a movie is much ado about nothing, they can rank it dead last on their ballot while a scrappy underdog like “Spotlight” or “Moonlight” is less likely to inspire that kind of derision, getting those crucial second and third place votes that can push a film ahead of a presumed front-runner. The same thing might have even happened to “Roma,” which Netflix spent a lot of money promoting to awards voters at large. Speaking of which …

SEEWho’s up (‘Parasite,’ ‘Bombshell’), who’s down (‘The Two Popes’) in Oscar race after SAG Awards nominations?

5. Could there be anti-Netflix bias?

It’s hard to say exactly how much the Netflix effect helps or hurts a movie without interviewing every single voter and auditing every single ballot, but having a streaming distributor disrupting the movie business and the awards business so dramatically and so quickly is a factor we shouldn’t discount. It’s possible any resentment against the online studio is countered by how many industry heavyweights have actually worked for Netflix in recent years — Scorsese, Cuaron, Baumbach DuVernay, Soderbergh, Fincher, the Coen Brothers, and so on — but in a close race, even a little resentment could hurt, especially given how much Netflix is able to spend on campaigning.

One might think Neon, which distributes “Parasite,” is too small to compete with the Netflix machine, but remember that Bleecker Street (“Spotlight”) and A24 (“Moonlight”) were able to beat bigger and more established studio contenders.

6. The academy is more international than ever

The academy has been expanding its membership in recent years, opening its doors to filmmaking insiders from diverse racial, cultural and national backgrounds. That didn’t help “Roma” win last year, but it did help that film earn surprise acting nominations for both Yalitza Aparicio and Marina de Tavira. It’s possible “Roma” was evidence that the door had opened for a more international Best Picture winner, even if that film couldn’t capitalize on it.

“Roma” didn’t receive any Screen Actors Guild Award nominations last year, which perhaps should have been a sign of soft industry support. But it was a foreign film without big-name stars, so that wasn’t a huge surprise at the more populist SAG Awards. Many of us took for granted that “Parasite” would be shut out by the guild as well, but it ended up with a nomination in the top category for its ensemble cast.

“Spotlight” won that award, and “Moonlight” was nominated, and only three films have ever won the Best Picture Oscar without that SAG nomination (“Braveheart,” “The Shape of Water” and “Green Book”), so if “Parasite” wins the top Oscar we may look back at this nomination as the moment the awards season turned.

So is “Parasite” really starting to look like a possible winner despite how unprecedented that would be? Or will it not be on the academy’s wavelength?