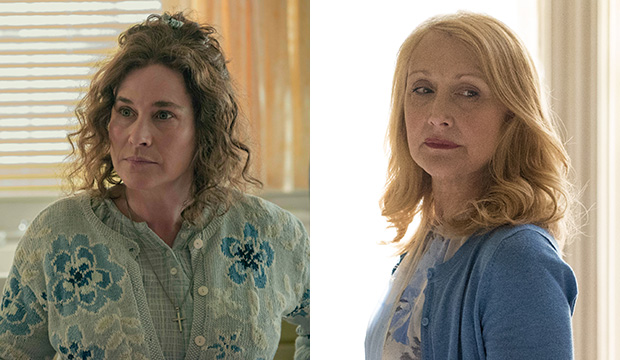 Patricia Arquette and Patricia Clarkson could face off in the limited series/ TV movie supporting actress category at the Emmys for both playing mothers suffering from Munchausen syndrome by proxy. Clarkson is currently in first place in our combined odds for her performance in HBO’s “Sharp Objects,” while Arquette sits in second place for her turn in Hulu’s true-crime anthology series “The Act.” But which Patty really has the edge in this incredibly tight race?

– A previous Emmy winner for “Medium” (Best Drama Actress, 2005), Arquette disappears into yet another role, this time with frazzled hair and a Southern accent. Playing the real-life Dee Dee Blanchard allows her to display a wide range of emotion, especially as we see Dee Dee throughout multiple phases of her life. Add the heft of portraying a real-life person and the loud, showy nature of the character, and you have nearly every box checked off to win an acting Emmy.

– She has already won the Golden Globe, Critics’ Choice and Screen Actors Guild Awards this year — for playing another real person, Joyce “Tilly” Mitchell, in “Escape at Dannemora.” That means she could win not one but two Emmys in the same night since she’ll contend in the limited series/TV movie lead actress category for “Dannemora.” This one-two punch of transformative turns could boost her chances in both categories.

–  According to Hulu’s CEO Randy Freer, “The Act” set a new record for the streaming service, bringing in more new subscribers than any previous Hulu original in its first month. Overall visibility and the show’s March-to-May run could work in Arquette’s favor.

SEE Why you shouldn’t underestimate ‘The Act’ at the Emmys

– The last actor to win two Emmys in one night was Stockard Channing, who won for “The West Wing” (Best Drama Supporting Actress) and “The Matthew Shepard Story” (Best Limited Series/TV Movie Supporting Actress) in 2002. If Arquette wins the lead race, as she’s expected to, voters could feel more inclined to check off someone else in supporting, like Clarkson.

– As flashy as the role is, Dee Dee isn’t the mustache-twirling, winking devil that the TV academy tends to favor time and again; Arquette’s bloodcurdling portrayal could be too tough for some voters to swallow.

– For her performance as Adora Crellin, Clarkson has already bagged the catch-all supporting actress Globe and the Critics’ Choice Award for Best Movie/Mini Supporting Actress. She also received a SAG nomination, but lost the award to Arquette. The good news for her is that she doesn’t have to face Arquette for “Dannemora” at the Emmys.

– Clarkson is already an Emmy darling who currently holds a perfect 2-for-2 record, having prevailed twice in Best Drama Guest Actress for “Six Feet Under” (2002, 2006).

– Unlike Arquette, who is arguably a co-lead alongside Joey King in the first half of the season of “The Act,” Clarkson isn’t heavily featured in “Sharp Objects.” She could also end up splitting the vote with her co-stars Elizabeth Perkins and Eliza Scanlen, should they be nominated. Perkins is in fifth place in our odds, while Scanlen is just outside in seventh. Arquette’s co-star in “The Act,” Chloe Sevigny, is in 22nd place.

– With several new limited series/TV movie contenders premiering in April and May, last summer’s July-to-August run for “Sharp Objects” could end up hurting Clarkson’s chances, since it will have aired almost an entire year ago when final Emmy voting commences. On top of that, it didn’t have a great awards run-up this winter, losing top prizes to reigning Best Limited Series Emmy champ “The Assassination of Gianni Versace: American Crime Story” and “Dannemora.”