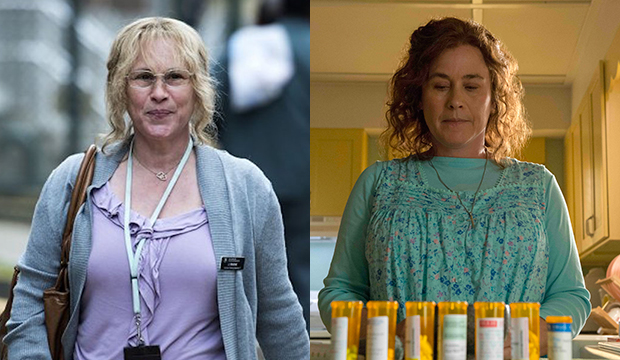 After winning the Golden Globe, Critics’ Choice and Screen Actors Guild Awards for “Escape at Dannemora,” Patricia Arquette is the favorite in our early odds to win the Best Limited Series/TV Movie Actress Emmy. But could she find herself walking away with two statuettes? The Oscar winner is sitting in second place behind Patricia Clarkson (“Sharp Objects”) in the supporting actress race for her upcoming Hulu anthology series “The Act.”

Based on the 2016 Buzzfeed article “Dee Dee Wanted Her Daughter to Be Sick, Gypsy Wanted Her Mom Murdered” about the real-life case, the true crime series follows Gypsy Rose Blanchard (Joey King), who tries to escape the toxic and abusive relationship with her mother Dee Dee (Arquette), who has Munchausen syndrome by proxy. (HBO released a 2017 documentary about this case called “Mommy Dead and Dearest.”)

Like her unrecognizable turn in “Escape at Dannemora,” Arquette has disappeared into another role, her frazzle-haired Dee Dee’s caring and protective demeanor in public belying much darker, sinister secrets. The one-two punch of the transformative performances could impress voters to check off her name twice.

The last actor to win two Emmys in one night was Stockard Channing, who prevailed in 2002 for her supporting turn on “The West Wing” and her lead performance in the TV movie “The Matthew Shepard Story.” Allison Janney has since won two Emmys in the same year, in 2014 for “Mom” and “Masters of Sex,” but the latter was a guest award, which is given out a week prior at the Creative Arts ceremony.

Arquette, who won a Best Drama Actress Emmy for “Medium” in 2005, just needs the Emmy to complete her sweep for “Escape at Dannemora.” The Showtime series’ November-to-December run no doubt helped her land those Globe, Critics’ Choice and SAG wins in January over presumed favorite Amy Adams, whose “Sharp Objects” aired in the summer. (They tied at Critics’ Choice.)

But recency bias could be what hurts and helps Arquette in both races. By September, “Escape at Dannemora” will be far more distant than, say, “Fosse/Verdon,” which premieres April 9 and whose star Michelle Williams is in third place in the lead race. But “The Act,” which launches March 20 on Hulu, will be fresher in people’s minds.