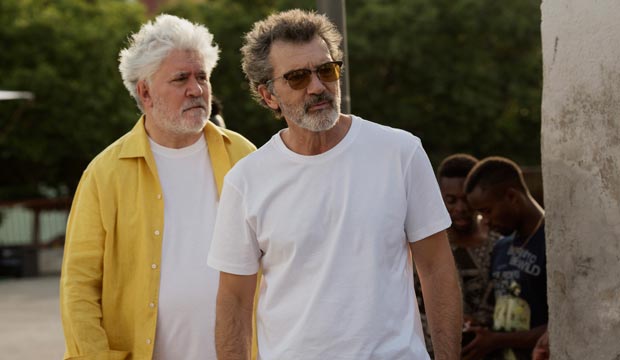 Quentin Tarantino (“Once Upon a Time in Hollywood”), 56, and Martin Scorsese (“The Irishman”), 77,  aren’t the only auteurs whose current films reflect the gaze of an aging filmmaker whose main characters look back upon their lives and their chosen careers, be it actor or hitman.

However, Spanish icon Pedro Almovodar, 70, takes his “Pain and Glory” a meta step further by placing a director character — played by his most frequent leading man, Antonio Banderas — in the center of his tale. He also uses his colorful, art-filled home as the one owned by Salvador Mallo, a filmmaker living in Madrid. Meanwhile, another actor, Asier Etxeandia as Alberto, seems to be a substitute for Banderas, who had a similar falling out with Almodovar after the actor started doing Hollywood movies in the early ’90s.

“Pain and Glory” is their eighth collaboration together since they first worked together on 1982’s “Labyrinth of Passion” and is Almodovar’s most autobiographical and satisfying projects yet.  That contributes to it being so touching as the on-screen star and director have a reunion, one that is partly fueled by Salvador’s desire to try smoking heroin to relieve the physical pain and mental agony he suffers from various ailments.

But the real reason for getting back together is a special showing of their film “Sabor.” Nostalgia is infused into the impressionistic storyline, as Mallo recalls his homosexual coming of age as a schoolboy in the ’60s and his supportive mother Jacinta (Penelope Cruz, another Almodovar regular) and her efforts to turn a series of underground of caves into a home. Matters get most emotional when Alberto performs a monologue on stage written by Mallo that mentions Frederico, his first adult love, who just happens to be in the audience. That causes his former beau — a former heroin addict who has an ex-wife and two grown sons — to pay a visit the director. They warmly catch up on old times and Salvadore is inspired to visit a doctor, drop his drug habit and reclaim his gift for creativity.

“Pain and Glory” currently is at 97% positive on Rotten Tomatoes, whose summary is thus: ” ‘Pain and Glory’ finds writer-director Pedro Almodovar drawing on his own life to rewarding effect — and honoring his craft as only a master filmmaker can.”  While some fans might miss Almodovar’s more bold and brazen impulses from his past films, there is something to be said by the  thoughtfully artful maturity shown here. As Anthony Lane wrote in his New Yorker review:  “There is something thrilling, not dulled, in the very honesty of the film, and in the vigor with which feelings, expressed at any age, can strike us like a slap in the face.” The film premiered at the Cannes film festival, where it competed for the Palme D’or and Banderas was rewarded with the event’s Best Actor prize.

“Pain and Glory” is indeed Spain’s entry for Best International Feature Film at the 92nd Academy Awards. Two Almodovar titles have competed before in the category, previously known as Best Foreign Language Film: “Women on the Verge of a Nervous Breakdown” (1988) and “All About My Mother” (1999), which won the Oscar. He  was nominated for Best Director and would go on to win a Best Screenplay Oscar for 2002’s “Talk to Her” while 2006’s “Volver” earned Penelope Cruz a Best Actress nomination.

“Pain and Glory”could very well pass all those achievements at the Academy Awards ceremony next year, if you believe the combined odds on Gold Derby’s Oscar prediction site. Right now, “Pain and Glory” stands at No. 18 among the Best Picture candidates. As veteran Oscarologists know, it is difficult for a foreign film to squeeze the most coveted category, let alone win.

But the good news for Almodovar and company is that the director currently is at eighth place among other helmers, sandwiched by Taika Waititi (“Jojo Rabbit” at No. 7 and Todd Phillips (“Joker”)  at No. 9. Meanwhile, Banderas — who has never been nominated for an Oscar — currently sits in fifth place, below Leonardo DiCaprio (“Once Upon a Time in Hollywood”) and right above Jonathan Pryce in “The Two Popes.”  But the fact that the Hollywood Foreign Press Association has previously nominated him for his big-screen work as Best Actor in an Comedy or Musical for both 1996’s “Evita” and 1988’s “The Mask of Zero” might secure him Best Film Drama Actor berth. He is ranked fourth on the combined odds Golden Globes site.

However, considering that Almodovar already won in the category previously, “Pain and Glory’s” best chance at an Oscar nomination could be for its original screenplay. Right now, it sits at No. 5 on our prediction site.