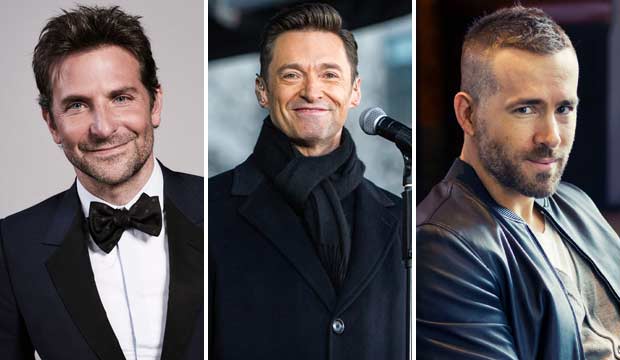 Hollywood awards often slap the stud: denying awards to male sex symbols, perhaps because entertainers who are desirable to women aren’t taken as seriously by the predominantly male industry establishment. But the reverse could be true at the Grammys this year. In an unlikely turn of events, three actors who have been named Sexiest Man Alive by People Magazine over the years could win music’s biggest prize for the first time: Bradley Cooper, Hugh Jackman and Ryan Reynolds.

Cooper is the highest-profile of the three this year since he’s currently a contender for multiple Oscars for writing, directing, producing and starring in the musical drama “A Star is Born.” The lead single from the soundtrack, “Shallow” with Lady Gaga, earned him Grammy nominations for Record of the Year and Best Pop Duo/Group Performance. The song is also up for Song of the Year and Best Visual Media Song, but those prizes go to the songwriters.

Jackman and Reynolds could also win for movie music, but they’re nominated against each other, so only one of them would be able to win, barring a tie. In the race for Best Visual Media Compilation, Jackman is nominated as the lead vocalist on the soundtrack for the musical “The Greatest Showman.” Featuring songs by Justin Paul and Benj Pasek (“La La Land,” “Dear Evan Hansen”), the film tells the story of circus impresario P.T. Barnum (played by Jackman), and the soundtrack was a crossover hit, certified double-platinum by the Recording Industry Association of America.

Reynolds is also nominated for Best Visual Media Compilation, though not for his vocal prowess. He contends as one of the producers of the “Deadpool 2” soundtrack, which features the original Celine Dion ballad “Ashes” in addition to songs by Diplo and Skrillex, and classics by Cher (“If I Could Turn Back Time”), Dolly Parton (“9 to 5”) and Pat Benatar (“We Belong”), among others.

Two more of People’s sexiest men are in the running this year, but music is their day job, so it’s less surprising that they’re included. Adam Levine is nominated for Best Pop Duo/Group Performance with his band Maroon 5 and featured artist Cardi B for their chart-topper “Girls Like You.” Maroon 5 are already three-time Grammy winners, so these awards are old hat for them.

Levine’s fellow “The Voice” coach Blake Shelton is also in contention — well, sort of. His song “I Lived It” is nominated for Best Country Song, but that award wouldn’t actually go to Shelton because he didn’t write it. Throughout his career so far Shelton has been nominated for seven Grammys, but he hasn’t won yet. Wouldn’t it be ironic if the movie hunks beat him to the punch?