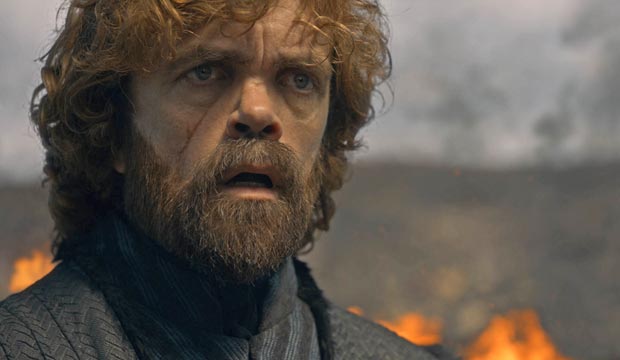 “Game of Thrones” looked like an overwhelming front-runner to win Best Drama Series even before its final season started airing. But Peter Dinklage looks like he’s almost as close of a lock to win Best Drama Supporting Actor. Just one look at our racetrack odds will show you he’s running roughshod over the competition. But it’s not quite unanimous that Dinklage will prevail. Almost, but not quite. One of our Experts and one of our Top 24 Users are going a different way.

Out of the 15 Expert journalists we’ve polled from top media outlets, 14 of them say Dinklage will prevail for the fourth time, which would be a new record in the Drama Supporting Actor race (Dinklage is currently tied with “Breaking Bad’s” Aaron Paul a three apiece). But the lone holdout, Peter Travers (Rolling Stone), is going out on a limb for Kieran Culkin (“Succession”). That’s a bold pick since “Succession” is a new show that aired way back last summer and we have yet to see how the television academy will respond to it.

However, “Succession” did well during the winter awards season. It was honored by the American Film Institute, won a Directors Guild Award for Adam McKay‘s work on the pilot, earned two Writers Guild nominations and picked up two Critics’ Choice nominations as well. And Culkin was nominated by the Golden Globes, where he was the only recognition for the show. Nothing from the Screen Actors Guild, but they’re often late to the party when it comes to new programs. The door is open at the Emmys, so keep an eye out. If “Succession” exceeds our expectations in the nominations, this could be a potential place to reward it.

Our Top 24 Users league consists of the two dozen users who got the highest scores predicting last year’s Emmy nominations. Among that group, 23 agree with the consensus that Dinklage will win, while one renegade, jasonface, thinks Michael Kelly (“House of Cards”) will finally get his due. Kelly earned three straight nominations in this category (2015-2017) for playing political fixer Doug Stamper, but he has yet to win. This will be his last chance since his show has ended its run, and one should never underestimate Netflix: just look at Ben Mendelsohn, who came out of nowhere in 2016 to win this category for “Bloodline” on the streaming service.

SEENothin’ but a number: Kit Harington (‘Game of Thrones’) would be youngest Drama Actor Emmy winner in 32 years

Do you agree with our overall odds that Dinklage is ahead, or do you agree with the minority report that says we should prepare for a major surprise? Click on the chart below for more detailed prediction stats about this year’s race. 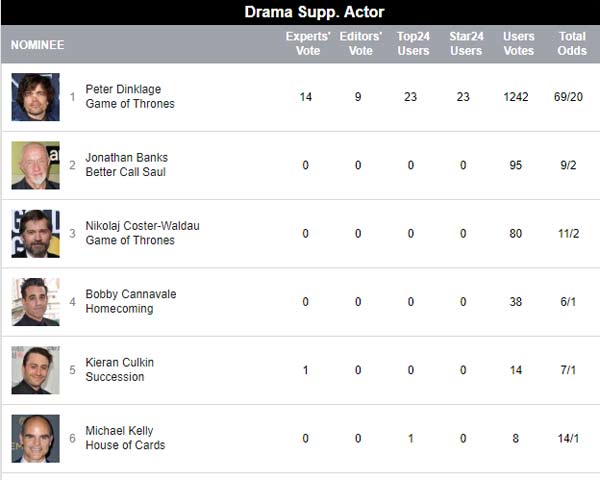