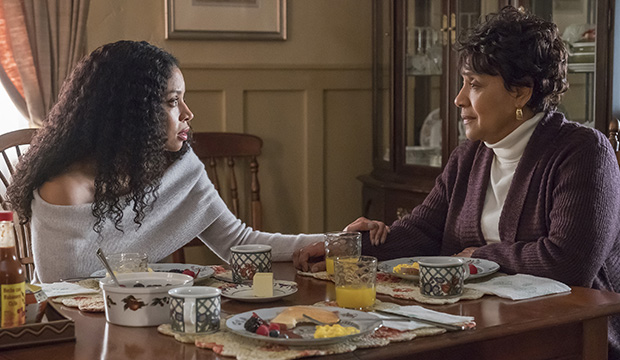 “This Is Us” has won three Emmys so far, all for acting and all for dudes. But this could be the year for a female star to prevail — and not one of its regulars.

Phylicia Rashad is in third place in our Best Drama Guest Actress odds for her performance as Carol, the mother of Beth (Susan Kelechi Watson), in the Beth-centric hour “Our Little Island Girl.” Two Experts are forecasting a victory for Rashad, Lynette Rice (Entertainment Weekly) and Stacey Wilson Hunt (Gold Derby), as are two of our Editors, Daniel Montgomery and Chris Beachum.

Rashad is the only female “This Is Us” star to have any predictions to win and is the one with the best overall odds as well. Watson is the only other “This Is Us” actress predicted to get a bid, in supporting, but she’s in sixth place in our odds and isn’t the top choice of any of our pundits. Chrissy Metz, who made the cut in 2017, is in 10th place in the same category, while Mandy Moore, one of last year’s biggest snubs, is in ninth place in the lead race.

SEE Will Phylicia Rashad be the latest to win an overdue Emmy for guest-starring on ‘This Is Us’?

A TV icon, Rashad could leverage that clout to a victory. The erstwhile Clair Huxtable has never won an Emmy before and only reaped two Best Comedy Actress bids for “The Cosby Show” (1985-86). She got a third nomination in 2008 for her lead turn in ABC’s TV movie adaptation of “A Raisin in the Sun,” but couldn’t stop the “John Adams” steamroller and Laura Linney.

The guest races are also kind to veterans and she only has to look to “This Is Us” for evidence. Her co-stars Gerald McRaney and Ron Cephas Jones, who also starred in “A Raisin in the Sun,” won Best Drama Guest Actor the past two years, the first victory for each. And we all know just how much actors adore “This Is Us.” It’s the two-time drama ensemble champ at the Screen Actors Guild Awards, and 11 of the show’s 18 Emmy nominations have been for acting (its other acting win was for lead Sterling K. Brown in 2017).

Rashad does have very formidable competition in the category though. Cherry Jones (“The Handmaid’s Tale) is the odds-on favorite, and lest we forget, “The Handmaid’s Tale” has won drama guest actress the past two years for Alexis Bledel and Samira Wiley. And three-time champ Jessica Lange is in second place now that “American Horror Story: Apocalypse” is forced to compete as a drama. There’s another legend in fourth place, Cicely Tyson, who’s gunning for her fourth bid and first win in the category for “How to Get Away with Murder.” Carice van Houten (“Game of Thrones”) and Connie Britton (“American Horror Story: Apocalypse”) round out the predicted top six.