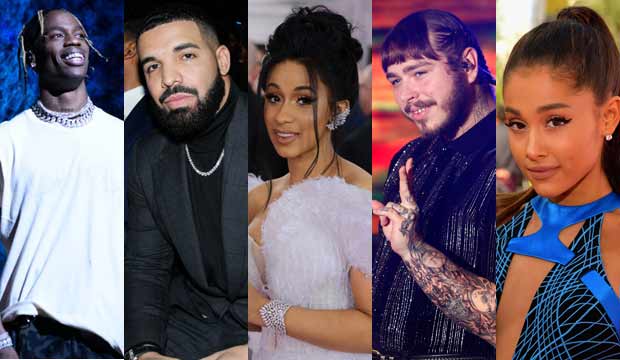 Hip-hop is the new pop. That was one of the takeaways of the 2019 Billboard Music Award nominations, where urban music dominated. Cardi B led that revolution with a whopping 21 nominations, the most ever for a female artist in a single year. Does that make her the front-runner to win? If so, she’ll make history. Make your predictions in 15 categories now here in our predictions center.

The Billboard Awards have always been hospitable to rap, but it’s men who have overwhelmingly been the beneficiaries of that success. Nelly, 50 Cent, Eminem and Drake have won Top Artist over the years. The only female rapper who has ever won was Lisa “Left Eye” Lopes as a member of the R&B trio TLC in 1995. That means Cardi B would be the first solo female rapper ever to win.

She could add that to the growing list of historic firsts she has already achieved. She’s the only female rapper who has ever had multiple number-one hits on the Billboard Hot 100 singles chart. She has been on top with three songs thus far: “Bodak Yellow,” “I Like It” with Bad Bunny and J Balvin, and “Girls Like You” with Maroon 5. Then she won the Grammy for Best Rap Album this past February, which made her the first female solo artist ever to win that award too.

Joining Cardi B in the race for Top Artist are the aforementioned Drake, past nominee Ariana Grande and first-time contenders Post Malone and Travis Scott. Unlike other music awards like the Grammys, these prizes don’t judge the best music, per se. They’re decided by the same metrics that determine the Billboard charts: record sales, streaming performance, radio airplay, touring and more. So who’s going to chart a course to the podium when awards are handed out on May 1?