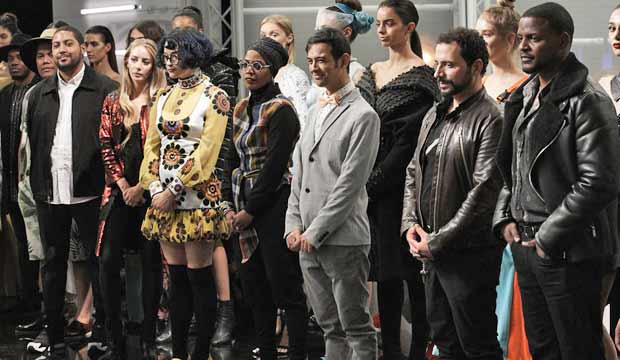 “Project Runway” came back to Bravo for its 17th season on Thursday minus long-time host Heidi Klum and beloved mentor Tim Gunn. For the most part, their replacements — model Karlie Kloss and Season 4 winner Christian Siriano — were fine, although he is a bit too low energy for my taste.  Kloss, on the other hand, was bubbly but a tad too eager when she finally got to say her predecessor’s catchphrase before the runway show: “In fashion, one day you’re in and the next day you’re out!”

As for the 16 contestants, they are an eclectic bunch whose ethnic backgrounds include Samoan, Syrian, Haitian-American, Colombian and Indian. They all introduced their style aesthetic early on by showing a sample of their designs, most rather impressive. But then the focus shifted to the task at hand, as they tried to make an outfit that reflected each judge’s photographed moment of when they got the fashion bug.

They did the usual trip to Mood and that is when I realized that a story line for this first episode was taking hold, focusing on two rather polar-opposite female designers: The warm and friendly Frankie Lewis of Louisville, Kentucky, and the cool and stand-offish Cavanagh Baker of Nashville. Frankie got to  confess to the camera that her boyfriend of nine years dropped her like a bad penny and that she lost nearly everything in the bargain, including her house and her dog.

SEEProject Runway is back but no longer packs a Tim Gunn

Cavanagh, meanwhile, got weepy about her dad, who unexpectedly died not too long ago, as she recalled the last time they spoke.  But any sympathy for her quickly melted given her rather snooty attitude. When Frankie learned that they got $250 to buy fabric for their first outfit, she was over the moon. As for Cavanagh, she couldn’t believe they ONLY got $250 for a high-end design (see video below). The pair bonded slightly when they weren’t certain about their fabric choices but that ended quickly.

Another commonality is that they both got plus-size models. Frankie, who specializes in that body type, and Cavanagh, who normally doesn’t, were flummoxed by just how much material they would need for their outfits. And they both sent out an SOS for others to pitch in and assist them with their sewing. In Frankie’s case,  several of the other designers eagerly helped her by adding a zipper and engaging in a makeshift sewing bee for her ill-fitting and too-tight body-suit that was falling apart.

As for Cavanagh, she actually had the nerve to ask her own model to do some sewing by hand. She expected to elevate her basic look with a tweed jacket, but lacked enough fabric to achieve that goal. Still, at least her model didn’t look like she was Hulk-ing out of her clothing while on the runway. Clearly, Frankie was ill prepared for what “Project Runway” requires in way of a skill set.

But when Cavanagh was caught on camera turning up her nose at the single beds in the shared living quarters, it was clear she was doomed — even if our Gold Derby odds had predicted her to win it all. Let’s just say she got the Cruella De Vil edit. Yes, she is not going to win a Nobel Peace Prize. But her outfit, as basic as it was, wasn’t as tragic as Frankie’s.  As she herself said, “My garment was flattering. It had detail.” That was very true. But Frankie is in and Cavanagh is out. Her closing line: “I’m so ready to wash my hair and sleep on a comfortable bed with a real pillow.”

Tell us in the comments below if you think that the judges blew it by sending the better designer home.

MAKE YOUR PREDICTION: Who'll win 'Project Runway'?
To save your prediction, you must log in to Gold Derby. Click here to sign in with existing account -- or create a new one.
PREDICT‘Project Runway’ now; change them until Thursday night’s show