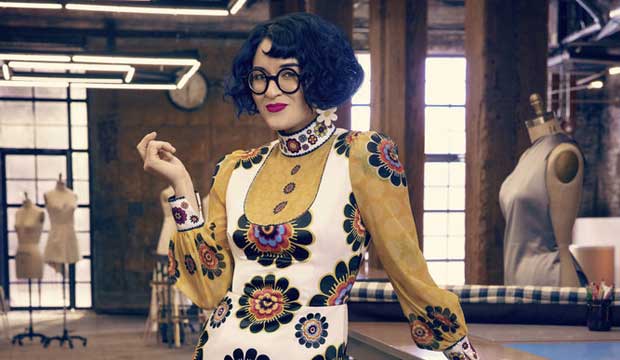 Apparently, the 15 designers are split into teams on this week’s second episode of the remodeled “Project Runway,” airing Thursday at 8 p.m. ET/PT on Bravo. The theme seems to involve fashion from the future. Mentor Christian Siriano is more than a bit dumbfounded by “Team Shoulder Horns,” which consists of Nadine Rolliford, Gary Spampinato (who is labeled as a “master corsetier”) and Season 17’s manic pixie fashion girl Hester Sunshine (shown above). And, also apparently, the challenge involves incorporating body modifications into the designs.

Christian asks them what their idea is, what are you guys thinking? Hester jumps in and says, “The way we were thinking about it initially is that these were three sisters who all inherited this rare genetic trait and that is where they got all their power from.” Christian’s reaction to this concept is rather priceless. She then continues: “We were talking about how we wanted to create these powerful outfits to kind of showcase this warrior queen vibe that was going on with them.”

Alas, their mentor is getting more of a bridesmaid feel — a no-no at best and a sure path to the bottom three at worst. Jamaican-born Nadine, whose bio says she is a professor of fashion and has her own brand, says her a-human modification was the color blue. Christian then states the obvious in the nicest way possible: “This color combination is going to be a subjective thing. I think some of the judges will like it, some of the others are probably not going to like it so much. That’s why I was nervous about when you were choosing your fabric. You picked colors and fabric that always go to that dated bridesmaid thing. They look not future, interesting and cool.”

As Hester notes in the video below, “Oh, crap! That’s not good.”