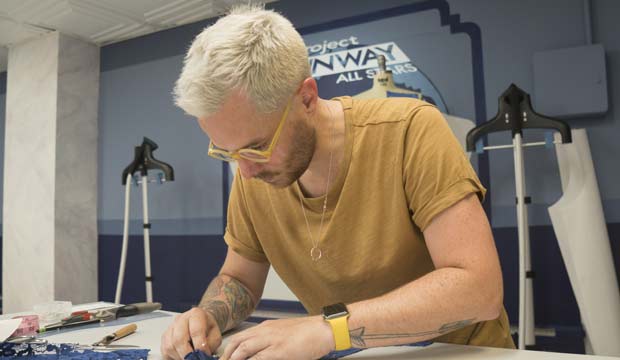 It was the worst of times, it was the best of times for “Project Runway All Stars” contestant Anthony Ryan Auld. In the season seven premiere he struggled with the recent loss of his grandmother and produced a slapdash look that nearly got him eliminated right out of the gate. But he made an epic comeback in the second week of competition. What did you think of his performance in “Top of the Class“? Was it grade-A for you like it was for the judges?

Luckily for Auld there was no elimination in the season premiere, so while he and Anya Ayoung-Chee finished as the bottom two, they both lived to design another day. But the second challenge got off to a rough start for Auld too. The contestants were tasked with creating a graduation party look in two colors. The designers didn’t get to choose their colors, though. They were assigned their shades by last week’s challenge winner Dmitry Sholokhov, and Auld got an unlucky combo of blue and orange.

If you ask me, there’s nothing wrong with blue and orange, but Auld wasn’t a big fan of the latter shade. In fact, he was trying his best to avoid it until mentor Anne Fulenwider advised him to embrace the orange. He did just that, and he ended up with a sporty design that made the judges glad they kept him around after his misstep in the season premiere. He went from a near-elimination to winning a design challenge, defeating runner-up looks by Sean Kelly and Seth Aaron Henderson. Did he deserve this redemptive “Runway” victory? Vote in our poll below to let us know.