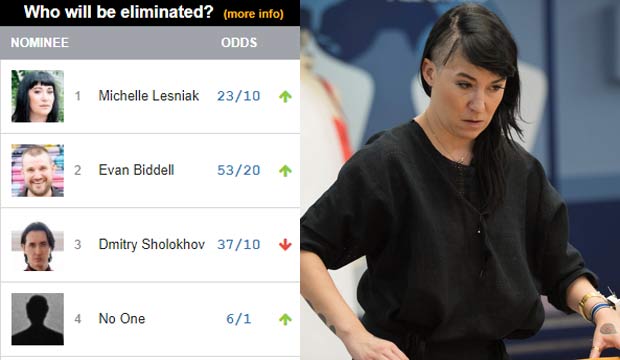 There are only four designers left in the special all-champions edition of “Project Runway All Stars,” so there’s nowhere to hide. One stitch out of place could mean disaster, especially with the way the competition has swung wildly all season, with contestants going right from the top of the heap to the bottom of the pack and vice versa. So who (if anyone) will be ousted in the season’s penultimate challenge?

According to the combined predictions of Gold Derby users, Michelle Lesniak is the likeliest to be eliminated. She gets leading odds of 23/10 of being sent home even though she has been one of the strongest contestants all season with two challenge wins and four other high scores. She even had a four-week streak from episodes 7-10 where she was in the judges’ top three every time.

But last week in “Nina Says Don’t Cry Over Spilt Silk,” Lesniak came this close to going home. Even though she had won the previous challenge, she bombed her royal ball gown design with a patchwork dress that guest judge Iris Apfel thought was “totally inappropriate” and Isaac Mizrahi described as “lumpy.” Luckily for her the judges liked Anthony Ryan Auld‘s look even less, though our readers thought it should have been Lesniak who went home. Can she come back from that, or has her fashion train totally derailed?

Lots of designers this season have rebounded in a big way right after a close brush with elimination, so if she survives this round we think the next most likely to go is Evan Biddell with 53/20 odds. The Canadian champ is the only designer remaining who represents one of “Runway’s” foreign spin-offs. He was bulletproof for a while, going nine weeks without a single low score. But then he had his own close brush with elimination when he finished in the bottom two in “Climate Quick Change.”

But maybe they’ll both get lucky. Some of our users think no one will be eliminated and all four of the remaining designers will earn spots in the finale. What do you think? Click on the elimination predictions graphs below for more detailed forecasts for tonight’s show. 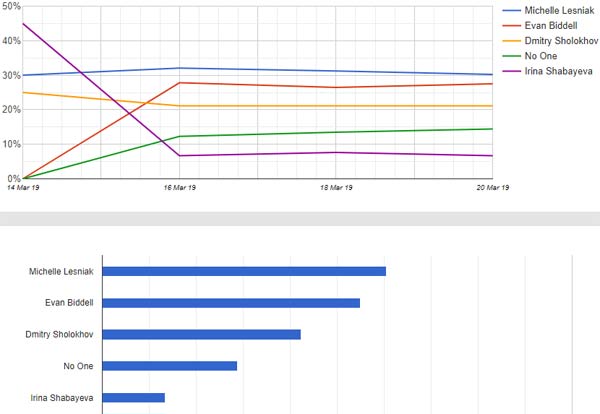