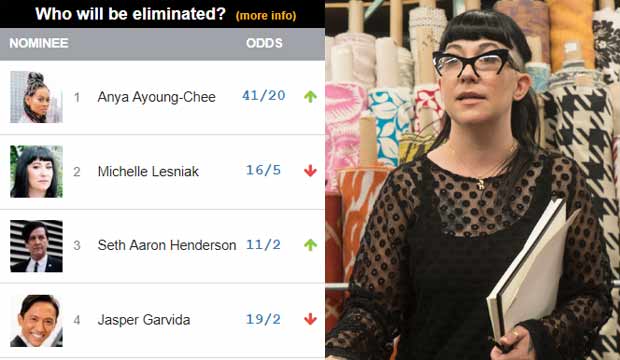 Week two of “Project Runway All Stars” showed just how tumultuous this champions season can be. Anthony Ryan Auld won the “Top of the Class” design challenge after nearly being eliminated in the season premiere. And Irina Shabayeva was nearly sent home after a high score on night one. So who will be out in week three? Our users are betting on Anya Ayoung-Chee again, but Michelle Lesniak may also be at risk.

“Runway” season nine champion Ayoung-Chee disappointed the judges in the first challenge with a look that was far too safe for their tastes, but she redeemed herself in “Class” with a graduation party design that put her safely through to round three. However, she didn’t get a high score in the challenge, so she still hasn’t stood out to judges this season as a contender. Maybe that’s why most of our users still think she’ll get the boot. She gets leading odds of 41/20 of being sent home from the competition.

“Runway” season 11 winner Lesniak ranks second with 16/5 odds of elimination. After just two weeks of competition there have only been four contestants who have sailed safely through without a high score or a low score from the judges thus far, and she’s one of them. The other three are all foreign winners: Django Steenbakker (Netherlands), Jasper Garvida (UK) and Juli Grbac (Australia). Perhaps one of them is due for a turn in the winner’s circle — or on the judges’ hit list.

Who do you think will be eliminated tonight? Click on the graphs below to see more detailed prediction stats for episode three. 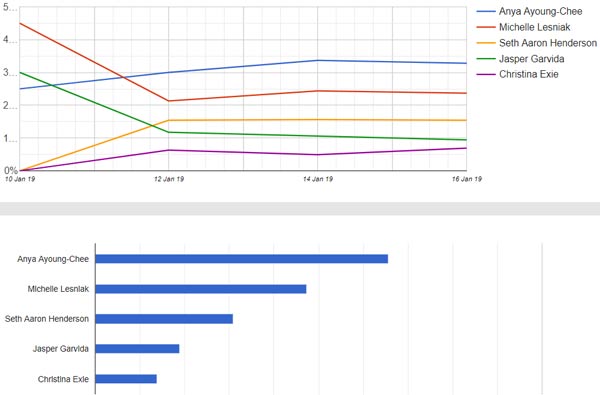