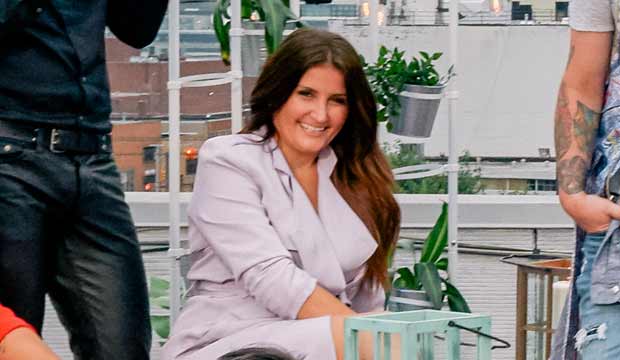 Another one bites the dust on “Project Runway All Stars.” Juli Grbac was the latest international contestant to be deported from the show this season, which pits American “Runway” champs against the winners of foreign spin-offs. So far three out of the four eliminations were of designers who came from abroad. Did the Australian Grbac really deserve to be ousted at the end of the “On the Prowl” design challenge? Vote in our poll at the bottom of this post to let us know.

Grbac wasn’t revealed as a contestant on the show until the end of the season premiere, so her competition didn’t start until week two. But maybe she could have used another week to settle in because she never wowed the judges during her four weeks in contention. She finished in the bottom two in the unconventional materials challenge by delivering a look that the judges thought was basic and bland. And she had the same problem in “On the Prowl,” when the designers took their inspiration from zoo animals.

Grbac was inspired by a gibbon, but her interpretation of that animal’s look and personality was just to apply white tufts to the hips of a conventional black dress as a nod to the white fur on a gibbon’s cheeks. But Isaac Mizrahi didn’t think the dress was flattering. Georgina Chapman felt it was “lacking in any personality.” And Alyssa Milano felt it emphasized all the wrong places on the model’s body.

Despite those critiques of Grbac, I thought the judges would oust Django Steenbakker for his odd, unflattering mint-green interpretation of a lion, but they preferred a bad look with ambition to a bland look that didn’t express a point of view. As Chapman said of Steenbakker’s design, “I kind of love him for his epic failures.”

SEE‘Project Runway All Stars’ recap: The designers went ‘On the Prowl’ with their zoological looks [LIVE BLOG]

Steenbakker wasn’t even in the judges’ bottom two. He had a low score but was declared safe. This week’s second worst designer according to the judges turned out to be Sean Kelly for his grey plaid giraffe. I liked Kelly’s look a lot better than the judges did — and a lot better than Steenbakker’s — but to each their own. Vote below to let us know who you think really deserved to get the boot.