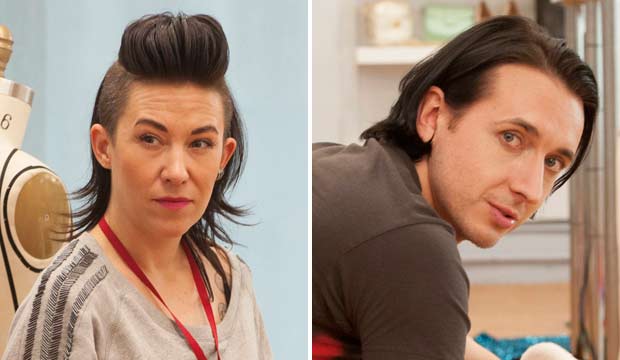 “Some of these people are just wolves in sheep’s clothing,” said “Project Runway All Stars” contestant Michelle Lesniak after the drama that ensued during the “On the Prowl” challenge. She designed a jagged-edged look inspired by a porcupine, but some of her fellow competitors thought she plagiarized one of Dmitry Sholokhov‘s looks from a previous season. Sholokhov seemed to think so too. The judges were also reminded of his aesthetic, but they didn’t think she stole anything from him because they gave her the win. What do you think? Vote in our poll at the bottom of this post to let us know if she really deserved this victory.

The designers were well into the workday when Irina Shabayeva caught a glimpse of Lesniak’s look and tattled to Sholokhov about the similarities she perceived. Evan Biddell also thought they were similar, though he gave Lesniak credit for interpreting another designer’s style and knocking it out of the park. Isaac Mizrahi even told her that he thought it was Dmitry’s dress when it walked down the runway, but he loved it so much he wanted to wear it himself. And Georgina Chapman thought it was “wonderful.”

When Lesniak received her praise and won the challenge, the camera kept cutting to Sholokhov’s indignant expression. He didn’t accuse her in front of the judges, and when all was said and done he said with a sour face, “She did a great job, and she won. That’s all I have to say,” which was his unconvincing interpretation of graciousness.

I’m Team Michelle on this one. I thought she had an excellent design, and Sholokhov doesn’t have a monopoly on that dark, severe aesthetic. And while her opponents accused Lesniak of copying, it was Sholokhov who was called out by Chapman for copying his own look from the season premiere — the judges put him in the top-three anyway, and I’m not sure why. But maybe that’s just me. Vote below to let us know what you think about this week’s “Runway” rumble.