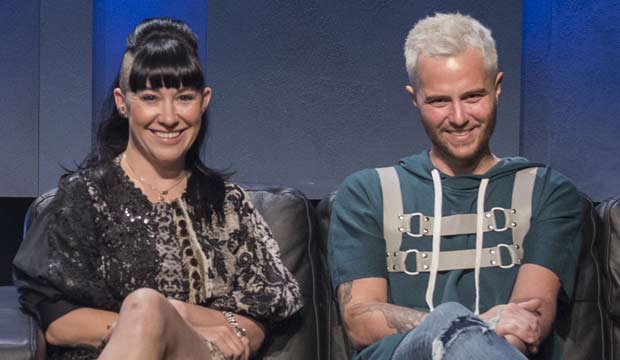 “They got it wrong,” commented our reader Hidden Angel after the “Project Runway All Stars” judges eliminated Anthony Ryan Auld last week in “Nina Says Don’t Cry Over Spilt Silk.” Angel thought Michelle Lesniak should have been sent home instead for the “scrapped together thing” she sent down the runway, and most “Runway” fans agree judging from the results of our poll. Scroll down to see those complete results.

Nina Garcia, the editor-in-chief of Elle magazine and a longtime judge on the original “Project Runway” series, guested on “All Stars” to give the final five designers a luxurious challenge: they had to design a formal silk gown worthy of a royal ball. Auld and Lesniak both struggled with that task since neither of them is accustomed to making ball gowns. Auld ended up with a caftan dress with feather details, while Lesniak made a kaleidoscopic dress in a patchwork of bright colors.

Those were the bottom two looks, but our readers thought the judges made the wrong call by sending home Auld. Only 16% of respondents agreed with that outcome. A whopping 56% thought Lesniak should have been ousted instead, while 28% didn’t think it should have been either designer in the bottom two — perhaps it should have been Dmitry Sholokhov? Another commenter, A. Spring, thinks “Issac is partial to Dmitry and it’s very obvious. Shameful.” Sholokhov was safe this week, but I personally would have ranked him lower than Auld for making what seemed like his hundredth long black dress of the season.

This is the second time in a row our readers thought the judges made a bad call, following Christina Exie‘s ouster in “Climate Quick Change.” But the greatest irony of Auld’s elimination was that Garcia, the judge behind the challenge, actually liked his look. If your name is in the episode title, shouldn’t your opinion carry more weight to sway the panel, or at least to veto a bad call by your colleagues? Alas, Auld and his feathers were eliminated while the other four designers flew to the next round. 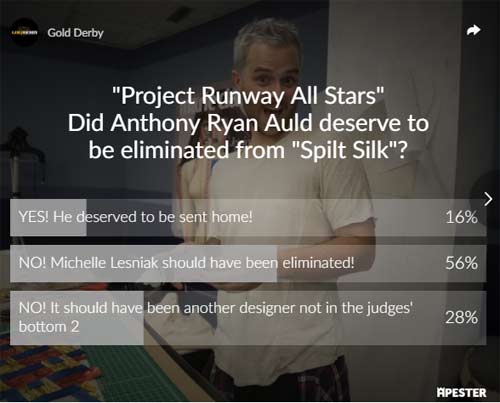