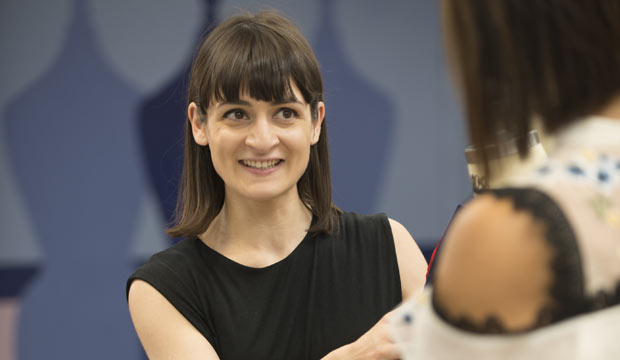 Christina Exie was surprised that she was eliminated from “Project Runway All Stars” in the “Climate Quick Change” challenge, and so were a lot of our users. Our predictions pointed to Dmitry Sholokhov as the designer most likely to be sent home, but he actually ended up with one of the top three scores even though his look sharply divided the judging panel. When we asked our readers what they thought of the judges’ decision, though, the vast majority thought the wrong designer was sent home.

The “Climate” challenge was to design a look that could transition from one weather condition to another. Exie had to create a look for the beach that would go from sun to high winds, so she went with a black bathing suit worn under a caftan that could be tied around the waist. The look wasn’t too inventive, and the cinching required too much time and effort for a quick change, but it was a sharp, cohesive look, and the fabric she chose for her caftan was widely praised. Indeed, only 13% of our readers thought she deserved to be eliminated for it.

SEE‘Holy sh*t!’ Meet the designers competing in ‘Project Runway’ season 17, and predict who will win

A quarter of respondents (25%) thought it was Evan Biddell who should have gone home. This was his first time in the bottom three all season, and it came after a struggle in which he found himself doubting and revising his design throughout the challenge. He ended up with a sports bra under a jumpsuit that the judges were also disappointed by, though guest judge Reem Acra loved his use of color, which may have been what saved him.

Another 21% of readers would have axed Anthony Ryan Auld, whose mountain look had to go from snow to sun. His dress had a blue and orange covering that could be removed with one hand, but it left one arm exposed and, presumably, frostbitten in those mountain climes. Nevertheless, while a couple of judges hated it, a couple liked it, including Alyssa Milano who could find no fault with it at all.

Perhaps surprisingly, the largest share of our readers (41%) thought the contestant who should have been eliminated wasn’t even in the judges’ bottom three, which means they thought Sholokhov, challenge runner-up Irina Shabayeva or winner Michelle Lesniak should have gone instead.

So was this one of the worst eliminations of the season? Check out the complete poll results below, and you can keep voting here to sound off. 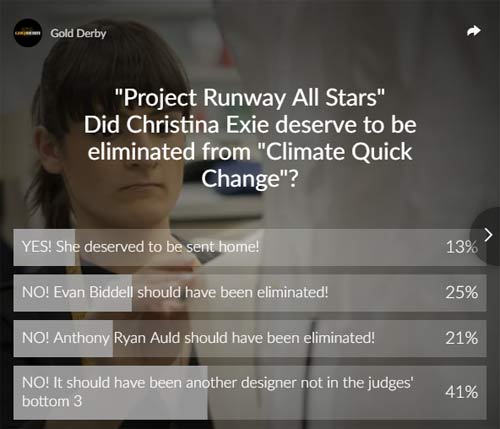