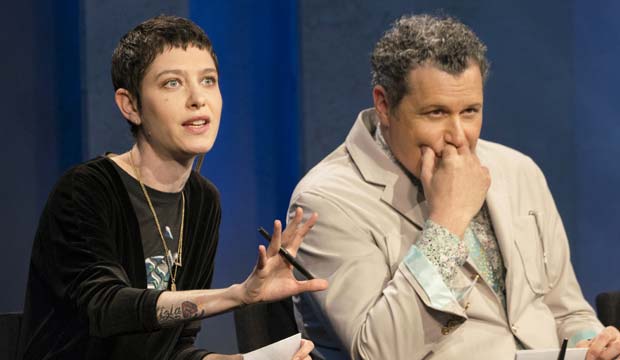 “Project Runway” focuses predominantly on women’s fashion, but episode nine of “All Stars” season seven flipped the script. In “All-Inclusive,” the remaining designers had to create gender-neutral looks that could be worn by anyone. So who better to guest-judge such a unique challenge than Asia Kate Dillon? The non-binary actor is best known for their Critics’ Choice nominated role in Showtime’s “Billions.” Scroll down for our live updating blog with all the minute-by-minute developments as they happen.

So who among the top seven designers was up to the challenge? This season of “All Stars” features past “Runway” champs from around the world, so the level of competition was already incredibly high, but the top seven who made it this far were undeniably the cream of the cream of the crop. All seven of them had one at least one design challenge before this week (Anthony Ryan Auld was the only one who had won twice). And until this week no one who won a design challenge had been eliminated. So after about two months of challenges no one could rest on their laurels. No one could consider themselves safe.

But two designers had been safe every single time. Evan Biddell and Dmitry Sholokhov were the only contestants who made it through the first eight challenges without a single low score from the judges, so their greatest strength has been their consistency. Meanwhile, Sean Kelly‘s one challenge win has been surrounded by four low scores, including two challenges where he landed in the bottom two. So there was arguably no one who had more to prove with their “All-Inclusive” attire than him. Find out what happened below starting at 9:00pm (all times listed are Eastern).

9:01 p.m. – Alyssa Milano arrived to present a gender-neutral theme for this week’s challenge, asking each designer to create a high fashion gender-neutral streetwear look. Keeping with the theme, new models were brought in for the challenge and the designers would only receive their measurements before meeting them and knowing whether the model identifies as male, female or gender non-binary.

9:03 p.m. – For Christina Exie, one of only two international designers left, this challenge was exciting because she already does this kind of clothing in her current work, as does Biddell, the other international designer. Initially it seemed like the American designers were a little less familiar with creating gender-neutral looks so it’ll be interesting to see if we finally see one of them leave the competition again.

9:06 p.m. – It’s interesting that the American designers could really only come up with jackets as their idea of a gender-neutral garment that would make sense for this challenge. Jackets are, essentially, already gender-neutral articles of clothing so I’m not sure I understand the stretch being made there, so I’m anxious to see how the judges interrupt those decisions.

9:13 p.m. – Anthony Ryan got the first hiccup of the night when he received his measurements of a 6’4″ model after already skimping on the amount of fabric he purchased because of how expensive it was. With a model that tall he had to change up his design to make sure he had enough fabric to manage a complete look.

9:14 p.m. – Anne Fulenwider arrived for her check-in to counsel the designers on their visions. She was totally on board with Dmitry’s trenchcoat idea (ugh!) because she thinks it’s a garment that needs to be updated in general, but wanted more from the jacket Irina was designing because she was toning it too way down. Despite being worried that Anne would call her look “grandma” again, Michelle Lesniak went to show her the jacket she was making and sure enough Anne called it “grandma wallpaper.” Surprisingly, one of the most confident designers, Christina, received the harshest critique: “boring.”

9:20 p.m. – When the new models arrived, Christina was happy to hear that hers liked what she was creating and said they’d choose to wear it. Every other designer was equally pleased with the look and reception of the models they got, except maybe Anthony Ryan who was still concerned with the height of his.

9:27 p.m. – Because she was finished with her look a few hours early, Irina decided to use some of her unused fabric to make a dress for herself. To do so Irina actually used the sewing machine Christina needed to use which caused Christina to use the machine Michelle needed, but despite their protests Irina refused to get off the machine. I honestly don’t know how Irina could even defend using a machine someone else wanted when she isn’t making something for the actual challenge!

9:37 p.m. – On the runway, Sean’s deconstructed tuxedo look was very interesting in a clean way. Contrast that with Michelle’s painted frock and even Irina’s oversized coat and you see the difference between form-fitting and oversized wear in terms of gender-neutral designs. Dmitry and Christina also put forth oversized designs, his in space silver and hers in all black, which were very different from Biddell’s gold and brown fringe look as well as Anthony Ryan’s oversized jacket that included neon piping.

9:40 p.m. – A frustrating result for him, Biddell was called safe, the only designer in that middle position, leaving the other six on stage to receive their critiques as the highest and lowest scores of the week.

9:45 p.m. – Michelle was one of the top performers with support for her color choices and the way it seemed comfortable and easy to wear. Sean explained that his look was inspired by Wall Street and a leather bar, but Isaac Mizrahi found the use of pinstripes dull and Asia Kate thought it was too expected for their taste. Georgina Chapman and Alyssa liked it though! Irina’s critiques were equally mixed with Isaac calling it hard to look at and Alyssa and Asia Kate loving it.

9:49 p.m. – Anthony Ryan’s look was mixed as well, but Isaac absolutely loved it while the others just seemed lukewarm on it. Dmitry however was very clearly on the bottom end of the spectrum because the judges wanted to change so much about it and Alyssa pointed out that the fabric choice just made it look “futuristic Martian.” Christina earned unanimous praise and Asia Kate pointed out that it achieves the gender-neutral goal because it could be worn on someone of any gender and it would present the same exact image and evoke the same feeling.

9:55 p.m. – With the judges panel clearly divided on many of the looks the decision of who to select as the winner and who to send home was probably one of the toughest I’ve ever seen on the show. In addition, this marked Dmitry’s first time ever in the bottom of a challenge in all of his three seasons on the show! Could he really be eliminated in that instance?

10:00 p.m. – In the end the judges selected Christina as the winner, her second of the season, and informed Anthony Ryan and Michelle that they were also in the top and safe. Irina had a low score, but was also kept safe and so it was between Sean and Dmitry for the elimination. Ultimately, Sean’s pin stripes were probably too uninteresting for the judges and so he was sent home.

NEXT WEEK: With climate change on the mind, Alyssa asks the designers to create “transformational resort wear.” Looks like Anne has some new digs to throw at the designers during workroom visits and then on the runway the models will have to transform their garments from one look into another. 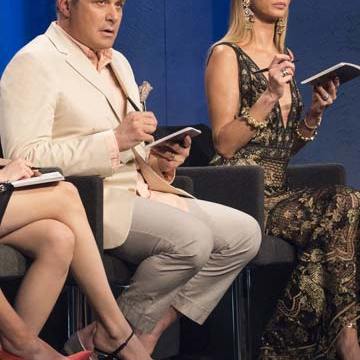